This is the official forum right?

Why am I finding information from Community Managers in discord / reddit instead of the official forums? 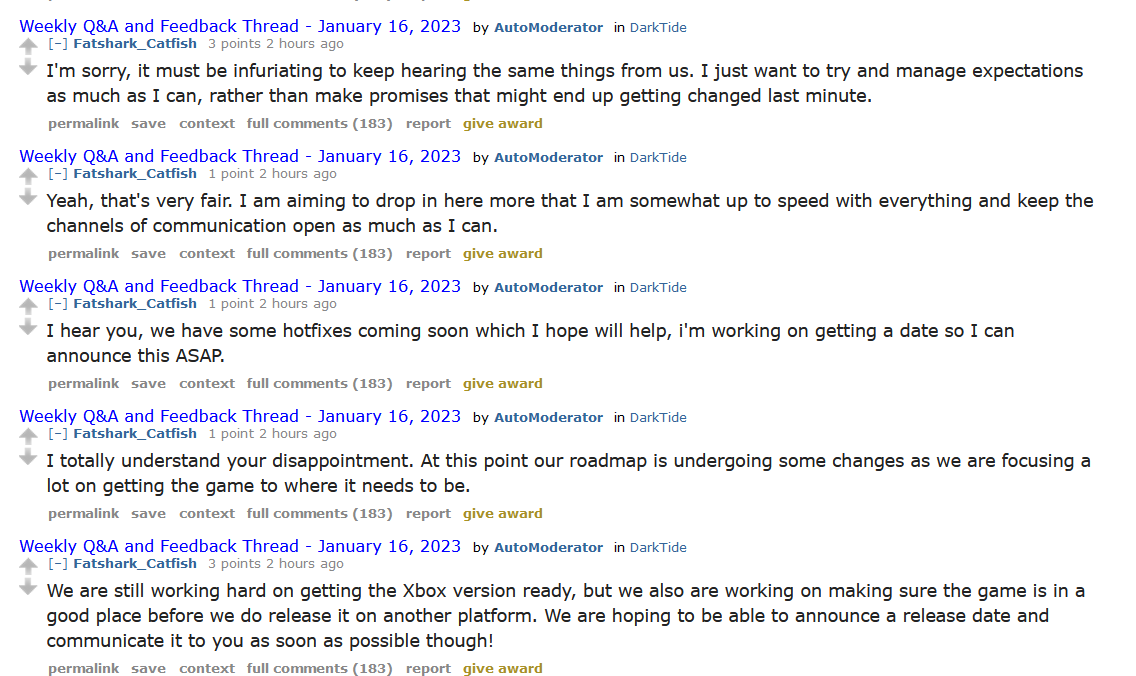 I think generally people are less nice here. On Discord a lot of people walk on eggshells and carefully avoid being negative/voicing their displeasure, one reason being that it makes it more likely a CM will answer.

I know Aqshy sometimes posts here, but almost exclusively in the Annoucements threads, to follow up on some questions (very occasionally).

Also the sheer volume and number of threads being created here, often to talk about the same subject over and over again (because Fatshark isn’t exactly quick to fix bugs or outstanding issues, case in point the crafting problem) probably drives the CMs away.

I’ve been wondering the same thing to be honest. If I see something that isn’t posted here I make a post and share it.

Communication until they have something to show seems like a no-win scenario right now. There are people asking why there isn’t any communication in one thread and people saying they don’t want to hear more communication in another lol

There are way more threads being created on Reddit. CM responded in the weekly Q&A thread that gets posted by the Auto-mod each week. Seen Reddit users direct other to this forum and discord.

Be better if they interacted here more. Right about Discord, worse than eggshells.

They’re terrible at managing their community so the community becomes unruly. They seem quite adept at locking down threads when they’ve deviated from the topic of discussion, so they’re still here and monitoring.

To me, that’s a sign of poor community management. They were hired to bridge communication between the community and the development team, but they’ve got nothing meaningful to communicate because the devs/management are awful at taking actions to give their CMs the ability to speak with confidence.

So most of the team is working on the Xbox release. No wonder any kind of patch or update is taking forever, let alone even just getting some kind of official communication out. There’s a minimal skeletal team working on the actual released game. Like with all their other games, support has been dropped straight after release, so they can focus on selling a broken sham of a game to a new set of customers.

So most of the team is working on the Xbox release.

They already are ??? I gotta ask for a source, for everybody’s sake

Just read the OP. One of the answers talks about how very hard they are working on Xbox release.

My most charitable interpretation is that there are way more people checking reddit and the discord than the forums because they’re more popular social media platforms than forums are, most of us probably frequent one of those sites anyway, and FS is just not great with communication.

My sightly less charitable interpretation is that the forums are basically just a busy box/containment board for FS’s most jilted feeling customers. And they’re just not great with communication.

Complaining of thy lot is the first step on the Road to Damnation
You need understand nothing to do your duty
Knowledge is power; power corrupts
Duty is vital, understanding is not
Duty first, duty last

Maybe more people look at reddit and discord vs forums.

are there no Mods in this Forum?

i deleted my reddit Acc for various reasons and i am not on the official DC also for various reasons that are my personal problems, preferation and registered here thinking i wont miss anything important.
I mean i want to reduce social media stuff and checking 3 platforms, websites or alike and thought the official forum is closest and most direct com platform for Devs/ CM to community?!?

And until i have to say i like the civil and educated tone here. Not 20 pointless posts and Memes like on reddit. Not hate for memes if people like it, but it mostly jut isnt my sort of humor

It’s probably quicker for them to post on discord and whatnot because they have the app on their phones or tablet.

thats why im here not there

My guess, they aren’t official formatted responses. Looking at the formatting of the announcements here and the casual conversation in reddit and discord. I think that is why they are using other platforms.

Except that account was created 6 days ago on reddit with the very purpose to engage the community there while there has been zero interaction here.

They have always done this. Aside from “official” official posts, they will just put out (sometimes important) information wherever the hell they feel like it, or where someone happened to ask and they happened to be there to respond to it. On discord (and probably reddit) there’s also plenty of ‘simps’ who worship anyone with official Fatshark status, so they get more love/jokes/fun memes.
They are godawful at communication, and clearly that isn’t changing anytime soon.

Posting randomly across multiple platforms is just half the issue, though. The other half is that very obviously the CMs have their hands tied behind their back, and can’t actually talk about anything at all. As shown by the 2-week complete and total comms blackout on these here very forums.

As an opposite, her account on this forum was created on the 4th and that was also her last post yet has been present on here reading Im assuming. So they are around, they just refuse to interact on the official forums it seems.