As far as i can see there are alot of threads for alot of stuff and i figured we could condense this one into one thread. What weapons and for what class do you hope/want to see in the game?

-Bolter/bolt pistol for the veteran. I know the human bolter varients are usually only used by high ranked members of the imperium but the bolter is iconic

-knuckle dusters/hand wraps for the ogryn. I cant be the only one who has ever wanted to just punch chaos in the face and i know some ogryn use knuckle dusters (at least i think that i read that somewhere)

-force rod and pistol combo for range (psyker) in some games you can use a force rod (a smaller force staff for use in one hand) combined with a pistol of some sort in the off hand. This weapon combo would likely be less psychicly powerfull then a full force staff like we have seen but is off set by having the option of a firearm for range too?

i would love a melta and a hellgun on the veteran, perhaps even a grenade launcher ( good ol’ DoW days)

for the ogryn im not so sure but, i would love it if he gets acess to an heavy bolter… 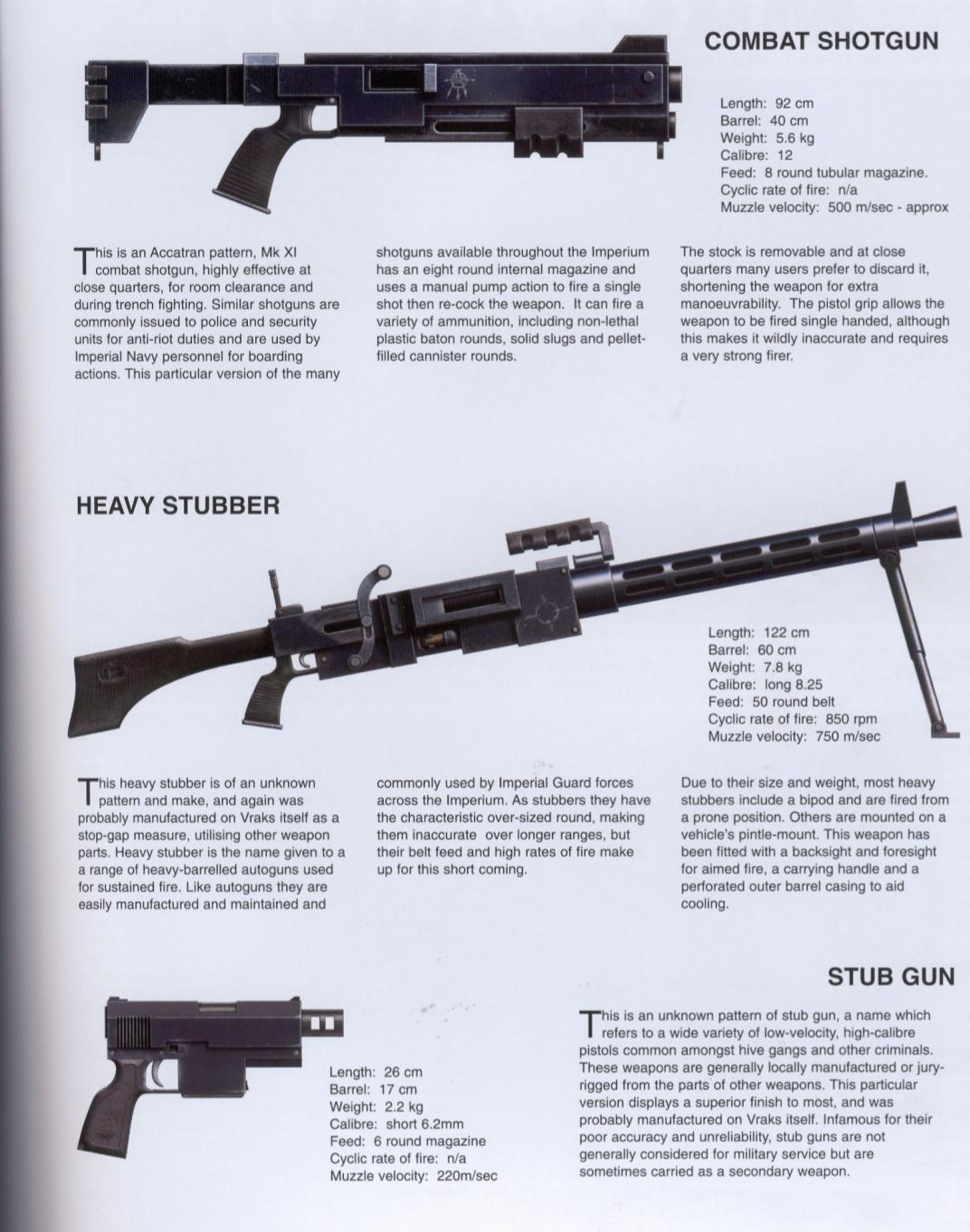 Psyker (I’ll do a whole post about the Psyker later anyway):

Force Sword with Hammerhand/Steel Arm: Working like Sienna’s Fire Sword where you hit the enemy with your unarmed arm

I think probably an eviscerator chainsaw for the zealot, which is different from the normal eviscerator ( a massive two-handed chainsword) by the fact that it looks like a chainsaw and theres literally a flamer attached so you can purge with fire and chainsword. Also, for the zealot a weapon called a fire pike, which is a fancy flamer with longer range.
https://www.games-workshop.com/en-NO/Necromunda-Cawdor-Redemptionists-2021 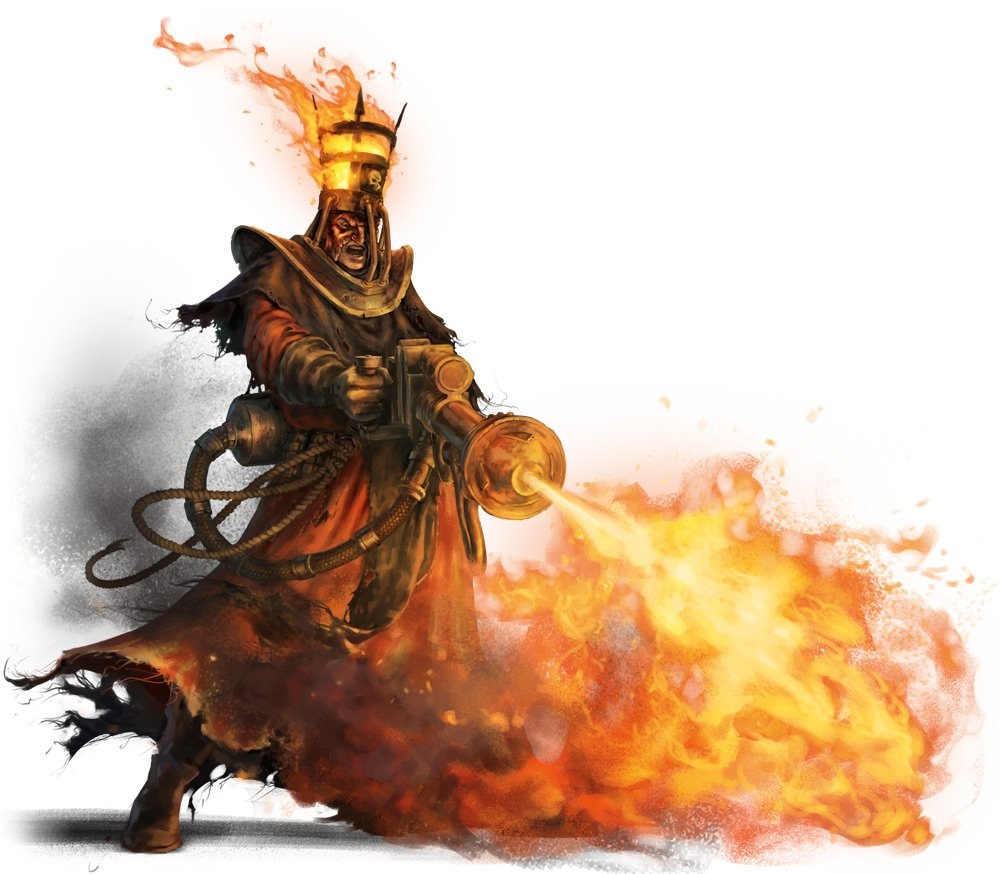 Other than that, autocannon for Ogryn cuz u need more dakka, more lasgun patterns for veteran, and some cool force weapons or like a force cannon for pysker.

A meltagun is sort of like an…energy shotgun right? A sort of weird “energy” weapon that shoots a cone of “superheat” at short range?

If this is the case id be all for it, ive always been fond of shotgun like weapons in games. Gonna have to look up the hellgun though.

If im right the main problem with flame throwers in V2 was that they take up all the chance for others to get temp hp? If they toss temp hp out for darktide (completely unconfirmed just speculation on my part) then flamer weapons could REALLY shine i think.

im actually don’t want to see a flamer in DT, reason being that they have to be so hyper specialised that a single player can handle most of a wave alone (with the cost of being useless against almost everthing else ofc) it just feels shitty if you bring a fun anti wave weapon and another player deletes everytrash enemy before you can be relevant.

a melta gun is implemented in “Space marine” as a shotgunlike weapon yes, but the discription is more like a anti vehicle weapon that melts amor, and produces a beam.
doesnt specify if its a short beam or a continous beam, and neither if its a focused beam or a spread shotgun like beam (tho it sounds more like a short beam to me based on use and descrition of effect)
maybe different patterns change this dunno
either way i just want a weapon that melts parts of enemys off, that just sounds so 40k to me

a hellgun is a weapon used by elite guard troops, and is basicly a supercharged full auto lasgun instead of a batterypack similar to a magazine, it recieves its energy from a backpack powersource linked to the weapon

I hope we get multiple one handed melee weapon + pistol options. I’d like to see a Power Sword + Handflamer option.

That would be ideal, but I doubt we’ll get that level of customization.

when they announced weapon customisation i never even thought about the melee weapons, maybe there is something, that could be quite intresting

I mean, alot (not all but alot) of melee weapons used by even the regular people of the imperium are quite tech heavy even when they dont seem it. Power weapons have field generators…chain swords, nuff said. Maybe even customize the force energy of a psyker’s force sword? Heck some humans even use a power fist type weapon…that could be customized heavily. I think if they DONT let you customize melee weapons its a huge oversight.

Weapon dependant mind you. Apart from a serrated edge im not sure what all can be done to the ogryn knife

26.00min there u go with Knuckledusters 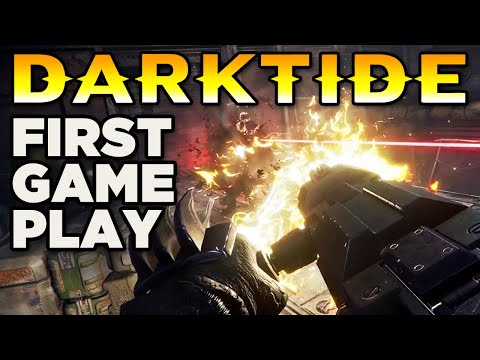 While watching that video at about 14:45 the Psyker i belive says something along the lines of “typical relying on grenades” maybe payker has like…somwthing else? A psychic focus that gives an extra power? Idk, might be wishfull thinking.

Also i did see that punch at 26…nice

i think its the ranged atack from the psyker

i meant the orbs at 27:12 it looks like a reskin atack that sienna already used

Fair, however the veteran/zealot gameplay i saw on the…i belive PC gamer channel had the hud on and even when out of grenades. The same grenade icon stayed the same…this could mean many things 1: WIP hud glitch or 2: you choose what you equip in the grenade slot. I think some special psyker BS item for that class is not out of the question. Once again…pure speculation based on the voice line at 14:45