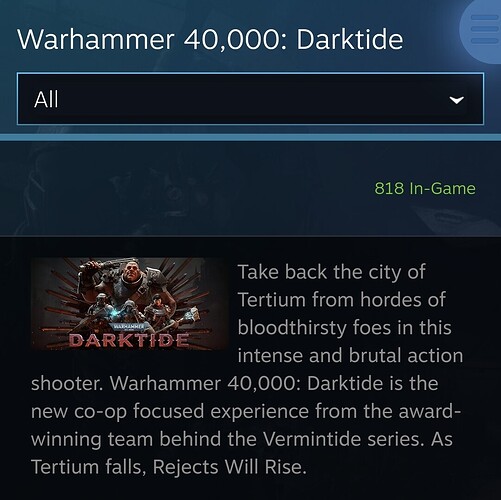 I am not sure as you look you are.

We’ll see. Game is really fun… However, people could also want to wait for new content and they want a break after the “big” news we had.

Where are you looking?

Yeah that was the shop reset time

Is it because of Steam Maintenance downtime though?

steam maintenance is 7pm est so no

Wow. I wonder what happened, because that seems like too much of an outlier. The lowest I’d seen was in the 4k range.

i mean steam somtimes does cut out like that randomly etc

steam maintenance is 7pm est so no

Minus the part where it was. Maintenance is generally between 6-7PM, varying slightly within a roughly 30 minute window, and also doesn’t take daylight savings into account. (AKA right now it’s generally around 6)

This topic is silly.

Oh look another post that misrepresents the player count. Game has issues, duh. Player count is dropping, duh. We know.

We don’t need screenshots at 2 AM to distort the real values. We don’t need to take a screenshot during the standard and predictable steam maintenance window and pretend like that’s an accurate representation.

Thank you! First thing that popped into my head was: Outlier → Tuesday → Steam maintenance.

When something is this much of an outlier, I think a little common sense is warranted.

I took a break after getting to 30 with only 2 characters and having felt very little reward in continued play after [checks Steam] 231.3 hours. Distracting myself with some backlog titles in the meanwhile.

I’ve definitely been feeling the itch to play, though as I found myself in a completely different game attempting to throw myself at what could constitute as a horde and blasting Immortal Imperium and Disposal Unit…