Official statement if your pre-order progression will carry over FAQ 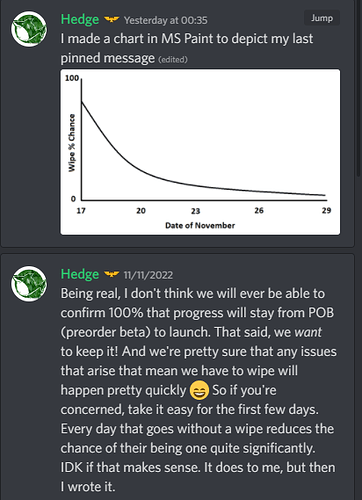 I’m curious as to what kind of issues could lead to a wipe… It would have to be a major problem in the progression system.

It’s possible, the beta had leaks of a lot of cosmetics becoming visible without being unlocked.

So basically if they run into bugs, which when patched could lead to issues down the line with existing character data, THEN they will delete the beta progression to avoid this.

Player wipes are not desirable, but understandably he’s not willing to say it will not happen. Because, when you’ve been doing this for as long as Fatshark has, you know things will absolutely go wrong in the worst possible ways when you don’t want it to.

Obviously once you get to release, then server wipes are HIGHLY UNDESIRABLE. And you’re much more inclined to undertake massive database restorers or code fixes rather than doing a full on wipe. But if you’re like 1 day into the pre-order beta period, and your team finds “oh yeah by the way somehow the new Psyche flamethrower staff casuses our servers to basically explode. You can either do a player wipe, or everyone in engineering will have to work 2 weeks to figure out a fix” you’re probably are just gonna wipe the database and start from scratch.

i still don’t see any official communication about the progression in the pre-order
he (she?) simply say: we want to
not: we will

No, they cannot guarantee anything there and it would be silly to do so.

There’s no need to look for major issues to prevent a wipe. It could just be something in the savefile or in the code or data that no longer works from one version to the other.

Basically as they are branching (creating a beta version), they need to ‘turn off’ or ‘unplug’ some systems, maps, weapons, etc… Which lead to code or data being ‘ignored / shelved / unplugged’. That could also including metadata from save file (basically text that says : ‘Hey this guy unlocked X weapon’)

It’s always rather risky to ‘branch out’ because while the beta version is not being worked on, the ‘real’ version of the game IS. Meaning that they could update systems, code and data on the real version that is no longer working with data/code from the beta version.

Once the release date come, they will have to do a ‘merge’ between the two versions, and this is usually the part that is risky. Realizing that some code/data no longer works with the new version and cause crashes for example or major blocker.
If the merging goes bad enough, they could have to wipe old data from previous version, and that could include data from save file or other things.

Now, let’s have an rather extreme example :
On the beta version, they decide to try out a brand new weapon. A reaper cannon, or a rocket launcher. When a player unlock lvl 12, they get rewarded with said weapon. So the save file will be updated with something like ‘This player has reached [level 12]’ followed by ‘this player unlocked [rocket launcher]’. Now if after the beta they realize that this weapon is not ‘cool enough’ or ‘too broken’ or any other reason, and they decide to cut it from the game.
The save file would need to understand that this weapon is no longer in the game, and that it should be updated accordingly. BUT. What if by removing the weapon and updating the save file, they realize that : ‘Oh crap, the player didn’t get anything at level 12!’ and the game no longer register that the player is level 12, and then the player can never reach level 13. And it completely break progression.

That’s the type of problem that could happen (although decent developers would probably design the system so that type of thing doesn’t happen way earlier than the current state of the game).

There you have it, that’s the gist of it.

Honestly, I’d rather they just say that they plan to wipe everything before the 23rd-26th and just have the ‘standard’ 3-5 day pre-order early access if they can’t confirm one way or the other.

At least then people have an accurate expectation to some degree.

Yeah, I’d just prefer it get wiped and keep the confirmed launch.

I guess we will know when they released all parts of the beta atleast I hope so , i already grinded all classes to max lvl like back in the VT2 beta where progress carried over, and it would be shame if it doesn’t. Can’t really blame them tho because Fatshark said they don’t know if they are able to pull it off this time. I really love this game but the uncertainty if i’m wasting my time right now if i continue playing kind of kills me lol.

There’s really no reason to reply back. They’ve only got to drag it out for 7 more days, then it’s a moot point that will be forgotten in deluge of official launch posts. I suppose if you just flat enjoy the game, go for it if you don’t mind the chance of having to level again. For me, I despise leveling in a shooter. I never want to do it more than once. In VT2 it just felt like a necessary obstacle that needed doing before I could relax and enjoy the game.

How many hours did it take to get all four classes to level 30?

i’m at 80h playtime now. The first character ( ranger) took me the longest , the others went considerably faster cause I did it with friends.