Sorry if anyone has already pointed this out, but isn’t Hadron’s left hand a little…unusual?
The right hand is clearly all metal, just look at the wrist joint. What’s left of Hadron’s face appears to be old, shriveled, rotting flesh. Her left hand, however, is silky smooth flesh. 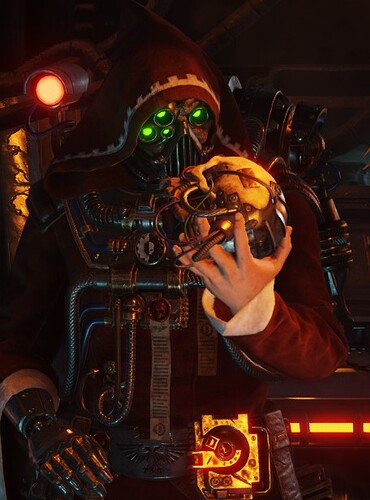 Assuming it’s intentional, it’s a very interesting character detail for a however many hundreds of years old tech priest. Vat grown parts do exist in the 40k universe, I believe, but for a tech priest to actually install one seems like a violation of the core tenants of their beliefs. This may explain why Hadron is uncharacteristically emotive for a tech priest, even if it’s mostly just sass and frustration. It may also explain why she’s in service of Grendyl’s merry band of misfits rather than literally anywhere else, having been rejected by her peers. Or, alternatively, someone forgot to swap her hand model and I’m writing free lore for Fatshark to use to pretend like it was on purpose, or this just became a bug report.

Edit: Apparently there’s an entire division of the adeptus mechanicus devoted to genetics research, and its members value flesh instead of despise it as well as augment themselves with enhanced flesh parts. Seems contradictory seeing as the cult of mars believes full cyberization is the next step in human evolution. Oh well, I just want to know why Hadron’s hand is weird. Genetor | Warhammer 40k Wiki | Fandom

Honestly, wouldn’t be first weird thing on this ship. A lot of things seem,… just off.

The genetors are a particular bunch that sees biology as a sort of machine. As the mechanicus has a presence in near all scientific disciplines, genetics and biomechanics are not exempt. A biologis may look as mechanical as any other techpriest, but are more likely to have things such as vat grown muscle transplanted into their bodies or more efficient lab grown internal organs. The overall thought being that the omnissiah created the organic machines they are, but also made them a design that could be improved upon. Thus do they give worship by ripping out their kidneys and replacing them with sanctified super-kidneys.

All that said, I don’t see particular evidence Hadron belongs to that divisio. She just has a nice, seemingly unaltered hand for whatever reason.

The secrets of the Mechanicus Secret Moisturising Hand Lotion may be something others find… unnatural.