Give the Slayer throwing axes

If you’ve played with Slayer, you know how much it sucks seeing ranged enemies and thinking “well, can’t do nothing about that”. It’s a bad design decision. We could live with that if the Slayer was the most powerful melee fighter, but that’s very much opened to debate (specially when ranged atacks are so strong and low risky).

So give him some sweet throwing axes. Low ammo, short ranged, heavy damage throwing axes. It won’t change the Slayer focus to a ranger, but it will give us a much needed way to deal with specials. It could be done two ways:

I like the 2nd option better, i guess. The short cooldown means you don’t have to worry about wasting it. And you can use the axes to close the gap when you leap isn’t enough to reach the ranged enemy (which is pretty much always).

Really. Throwing axes to faces. You can’t go wrong with that.

Throwing the axe like the warcamp boss would be cool, but op.^^

By Lore Slayers only wield 1h weapons or 2h weapons.

Dev has said they are trying to be as lore friendly as possible, so any ranged for slayer is out the window but throwing axes for any other class or career would be awesome.

Oh. Well, the axe is a 1h weapon. Never did any Slayer beatifully plant an axe into one’s facial territory by graciously propelling it? Their religion forbids them do lethally discard a melee weapon? Well, lore is lore. We’re doomed to sit helplessly marking enemies for allies who are having too much fun mowing down the horde to save our fragile dwarven Slayer ass against projectiles

Instead of having a few throwing axes, he could have this single different kind of axe which can be thrown, but he has to retrieve it from the ground like an ammo pick up (or from ammo caches). This way, it wouldn’t be a axe made specifically for throwing and wouldn’t harm the lore, i guess?

This has come up in another thread and lore being the reason doesn’t seem correct. 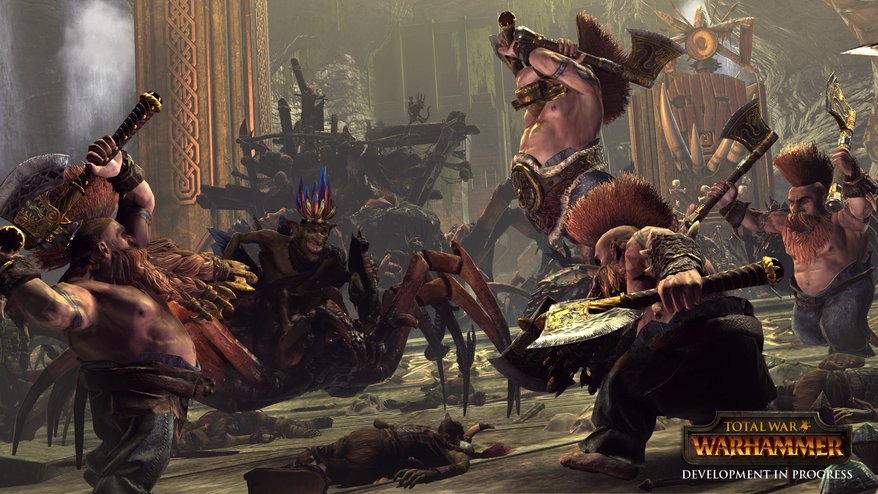 A Dwarf Slayer is the ultimate Dwarf warrior, the perfect personification of death and destruction, and bringer of doom to the enemies of their race. Slayers are the strangest and most deadly of all Dwarf warriors. They are outlandish doom-seekers,...


No mention of ‘not supposed to do anything at range’

http://whfb.lexicanum.com/wiki/Malakai_Makaisson
Malakai was an engineer turned slayer. He piloted a gyrocopter laying waste to skaven in one of the Gotrek and Felix novels.

Dev has said they are trying to be as lore friendly as possible, so any ranged for slayer is out the window

If a slayer had the opportunity to equip an irondrake’s flame thrower and solo take on an endless wave of skaven and kill them along with himself you bet he would be eager to do it.

I’m not a Warhammer expert, but I have read a lot of the books and think that I have a pretty good understanding of the lore. The fact that Slayers can equip and throw bombs currently is another reason.

Yeah, considering it’s an universe with gatling guns and lightning flinging, their life expectancy would be pretty much only a couple of battles. Besides, the Slayer already uses bombs, like Bing mentioned. Throwing his axe on a gunner he can’t reach doesn’t seems a stretch.

The thing is: among the 15 classes, the Slayer is the single one who can’t handle ranged fighters, which is a huge bummer.

If you’ve played with Slayer, you know how much it sucks seeing ranged enemies and thinking “well, can’t do nothing about that”.

I refer to blast bombs as “Slayer ranged weapons” and equip the 25% bomb dupe trinket to go along with it.

I do feel like Slayer’s are missing something. Dual Axes are fantastic, but the damage of each of the individual axes makes both the 1h axe and 2h axe obsolete. (2h axe not being able to have backstabbery also makes me sad.) Each of the dual axes does roughly the same damage as both of the other axes.

This leaves them with only 2h hammer, 1h hammer, and war pick as secondary weapon options, and none of them feel good to me.

It also very much peeves me that 2h axe is just a terrible weapon in VT2. Both the single-target attack and the charged swing for it does only slightly more damage than each of the individual dual wield axes deal, and it’s slow as dirt. However, the Great Axe is iconic for the Slayer profession.

Daemon Slayer is the only Slayer that even includes dual wield of axes in the imagery. Specialist Weapon Group (Two-handed) is a staple skill for all of the careers. Trappings: Great Weapon is the only equipment entry for all 5 of those careers, even though Daemon Hunter is pictured dual wielding.

Yet in game? 2h axe just sucks. It swings slowly and inaccurately (just swing the light attack 3 times in a row, you have to change your angle every time in order to hit the head of the same target in front of you), has a bad push swing, single-target damage is poor, it can’t roll backstabbery anymore, it has bad stamina, and charged damage is similar to that of a 1h axe or individual dual axe yet takes significantly longer to occur. If it had cleave as a saving grace, 2h hammer does that better.

What’s the most common setup you see Slayer’s using in game? Dual Axes + 1h Hammer, for mobility. Where’s the great weapon? Why is the class that is the most iconic two-handed user in the history of Warhammer not incentivized to use a 2hander, and be rewarded for doing so?

The class features rewards multiple fast attacks due to the stacking buff. You know what that doesn’t reward? Slow weapons. War Pick is the only 2handed weapon that even comes close to being labeled as “high damage” and it’s so incredible slow and has such a negative impact on your ability to move that it’s an intentional handicap to equip it.

Slayer needs a class perk of “Deals double damage with 2handed weapons” or something similar.

No mention of ‘not supposed to do anything at range’

FYI - both of your links have extra numerals at the end that result in the links being broken unless the 10 and the 7 are removed.

Fixed thanks. Must’ve copied some other characters in the ctrl+c ctrl+v process.

This is so painful it almost hurts to read. THANK YOU.

I knew I wasn’t alone in my feelings of how poor a performer the 2H Axe feels. It should be THE weapon to use on Slayer. You should be able to spin and cleave through everything with it. I miss the backstab trait as well. It used to wreck rat ogres in V1.

Yeah it just makes me sad

Great Axe with Backstabbery was my go-to weapon for VT1, and it’s just completely worthless in VT2. Here’s hoping it gets covered in some sort of balance overhaul…

screw throwing axes, where are my doomseeker weapons