I am disappointed not to find in the new update the possibility that PC players have to see the score of my life and other players as well as the numerical counter of the remaining ammo of my teammates. Wasn’t it possible to add that part of MOD also to those who play on consoles (XBOX)?

Yeah my group of friends on PlayStation were expecting to receive the same UI that PC has but seems like that isn’t the case.

Hey there. These features weren’t integrated due to an unfortunate oversight on our end. We’re on the case to getting them integrated in a future patch.

Thanks for the response Aqshy! This mean we will eventually get the same UI that PC has like numeric values and the Ult being a bar above the health bar?

Too bad because as console users we also have to wait for certification. It would be appreciable if, like for PC gamers, you did a patch soon to integrate these features. I decided to also buy the new skins to support you I would like to be treated as a PC user.

I’m on the case to asking both of these questions now.

Hello, so I have a mixture of news, but feel it better to be transparent and communicate with you all.

I don’t think there is a problem with the font size of numbers representing life (Detailed / Numeric UI) on TV.
Let’s consider that the base game already indicates the player’s remaining ammunition quantity at the bottom right. I really believe that the font size is much larger than the life value.

Sorry to have to wait another two months or more for an addition that we finally believed was available.

Knowing how much life you have (with a number and not a green and white bar) should be obvious as in all games the value of life is a very important parameter.

We look forward to it.

Any news about my topic?

Nope, but I can check in.

Thanks a lot. I will appreciate it. I hope that you will come back with good news for console players.

Is there any news on the detailed console user interface?
I see Twitch from my TV that I use to play Xbox and can see the numbers (HP and ammo quantity) from “detailed user interface from players playing the PC version”.
I believe there would be no problem for console players if you implemented it for them as well. I don’t think the screen is a real problem. Fatshark may give users the opportunity to disable this setting.

Hello, no news, I’m afraid, but I will keep pushing!

Any news for console players for Detailed UI?

There is no news, I’m afraid. If I have any, I will let you know.

I am dissatisfied. Fatshark had announced the implementation of the feature for all platforms in spring time but has not done so for those who play on consoles.

Console gamers pay more money for games than PC gamers, this can be easily verified. It would be a nice gesture to implement that function since it was said that the function had already been written. Console players always seem like B-series players. When I think back that I have purchased all the expansions and cosmetics available to support Fatshark.

I’m pondering whether to buy the next Fatshark title, Darktide, given the premise in the current title. Even not releasing the Sienna DLC since you had postponed the release of the new title is not understandable. If I have limited resources, I finish the current title first and then move the resources to the new one.

I am aware that my outburst will not change what the software house has planned but I would like it to be a point of reflection. If you choose to port your product to different platforms you should offer and verify that it is as similar as possible.

With love from a Skaven Slayer!

Console gamers pay more money for games than PC gamers, this can be easily verified. It would be a nice gesture to implement that function since it was said that the function had already been written. Console players always seem like B-series players. When I think back that I have purchased all the expansions and cosmetics available to support Fatshark.

You also need to deal with this terrible UI where icons of items are hard to identify and the meaningful stuff is placed on the right instead of the middle. 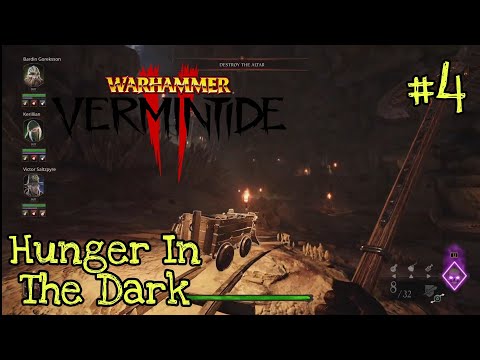