My feedback after 90 hours on Darktide Beta

So This post is just about my feelings so far on various things about Darktide Beta so far.
I’m really enjoying the game but I’m going to just be posting what I think needs changing or what I dont like so far, hence the feedback.

#1- Add more maps in rotation or make map rotations much shorter.
This is my largest issue so far in Darktide aside from the aforementioned performance of the game.

I find that if I only have 1 or 2 hours to play, it will only ever be on maybe 3 maps if I’m lucky. Currently today it seems to be the Torrent, The Forge/Smelter mission and the Cryo pods mission as well as the Ammunition mission.

I remember during the first few days we had access to that really cool map where we were on the surface working our way up a relay tower to stop a transmission I think and that map was awesome. It added some much needed time away from inside the hive where I feel I’ve seen a lot of the same maps already and so it was refreshing not being deep within the hive for a change. I miss that map and haven’t seen it since I think last Friday, the 18th.

#2- Bullgryn plate armor.
Here’s an example of what I’m Talking about. 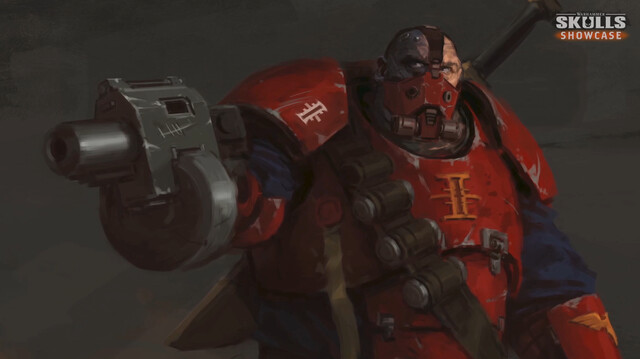 This was shown in the Dan Abnett trailer for Darktide. I’m a huge fan of Bullgryn and own 3 squads of them on tabletop. Many fond memories of beating space marines to death and smashing a forgefiend from time to time at my local gamestore. My reaction when I saw this image was pure joy.

Furthermore, To see in the start screen and cinematic that there’s Bullgryn plate armor on the some of the operatives such as the level 16 cutscene with Rannick for example. The armor can be seen in game as an actual thing that exists in the game.

While it’s cool I can feel like Braag from gaunts ghosts with the twin linked Heavy stubber. The name of our class is skullbreaker and not Gunlugga.

In the Ogryn trailer it was shown that there might be a maul that sparks like a power weapon. I was really hoping the weapon would exist in game. Sadly that is also not here for us to use, maybe later we’ll see.

In short, the prior 2 posts can be summed that we play as what would be an Ogryn bodyguard in tabletop and I feel that some options cosmetically are lacking and maybe some extra weapon options, at least regarding the shield, would be nice.

#4- perhaps some balancing of the weekly missions might be in order.
Some of the weekly bounties feel like if you dont have the time for them nor the coin to reset them, you’re out of luck.

For example, the complete 25 missions seems excessive. Especially when you have to play on that character for all 25 missions to get the reward. That’s a lot of time to sink into one character and I feel that could lead to frustration and burnout. Perhaps for now lower the cost to reset contracts. Or lower the mission requirement to 15 at the max. 25 missions is asking for about 5 hours of straight playtime maybe more on just one character in a given week.

#5- Something needs to be done about the ammo situation.

I’m sure plenty of people whom are writing on this forum at one point have come into contact with “that greedy bastard!”. The player who is inconsiderate, not necessarily toxic, just not thinking about the team or looking at the ammo icons in the bottom left before making the call to take the ammo.

Instead, the “greeder” takes every ammo box, every grenade box and eventually the party starts to run dry. Even with sharpshooters perk to get ammo back, some weapons like the bolter will run out of ammo. The bolter for example gets 2 shots back from an elite kill, not enough ammunition to keep the Sharpshooter replenished through the mission if they’re only shooting a few ranged opponents and specials. However, this opinion may change when I have a bolter at a higher level and more gear. We’ll see.

#6- I think Grimoire shouldn’t cause so much corruption.
2 Grims on a 3 wound health bar leaves you with a third of your health left. You will instantly die if you’re downed. This is horrible in quick play. When sometimes the party might want the grim but is not performing well enough to justify picking it up. Maybe make it so players can vote if they want to participate in the modifier for a mission to avoid a random who wants to do the grims. I think too many players are fixated on them and it causes problems when people lack experience to properly survive with them.

#7- The beast of Nurgle is a royal pain to deal with sometimes.
I understand the mechanic. Shoot him the the yellow spot on his back, do damage. Avoid melee engagement’s with him unless he’s not paying attention to you and you’re on his tail. He eats players foolish enough to engage him in a frontal melee attack. The beast also creates a lot of sludge on the ground that causes curruption and slows the player down.

Compared to the plague ogryn, this creature is truly a bossfight that will wipe random parties in quickplay when there’s a swarm on top of the boss. I think maybe at least the sludge shouldn’t last so long on the ground because it makes it really hard to get behind him depending on where the beast spawns on the map.

#8 The Veteran Scavenger perk NEEDS to be percentage based. Only gaining two ammo perk elite kill makes it almost worthless. If the veteran’s feat’s encourage the player to be a ranged elite hunter, empower them with more ammunition to do their job without them worrying about their ammunition so much. If you make Ammo too scarce it causes a lot of problems in quickplay with the aforementioned “Greeder”. Perhaps make it so the Veterange gains 2% of their ammo or maybe 5% on weapons like the plasma where they expend far far more than what’s received from scavenger. I understand that you want players to be encouraged to partake in melee combat. However, There’s far too many players that just shoot EVERY mob and blast EVERY enemy you might be in melee with. I feel that I just want to play with a premade forever, just like Vermintide because there’s too many people just being irresponsible with the limited munitions we’re provided.

#9 I think every melee weapon NEEDS to be valid for some reason and given a role.

Some weapons such as the Heavy Sword feel like they serve no purpose when compared to the combat axe series or chain weapons. Even the humble combat knife feels like it’s a fun weapon but the Devils series of swords and the Heavy swords have never felt good.

Likewise, why would I ever use an autogun when a Las weapon is always more efficient on ammunition.

#10 We REALLY need the option on some weapons to change the weapon optics.

The ironsights on many weapons is quite hard to aim with, especially when you take under consideration how option they move when ADS for a moment and you see the sights start to drift. I don’t recall such a mechanic in Vermintide and find the aiming drift to be frustrating for the sake of consistency.

I just wanted to add here that I tried not to post things many other’s have said before on the Forum.

It’d be nice if the premier range class Vet had its old ammo bonus of 75% instead of 40% we have now back. Or as you’ve said percentage returns on elites and what not.

They really need balance it based on guns not ammo. Its hilarous that the bolter gets more from an elite kill compared to a revolver considering bolter does so much more damage and is superior in every way.