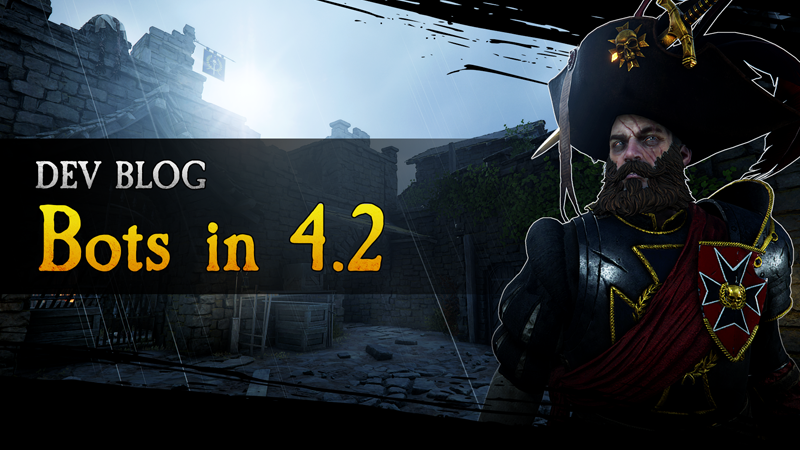 We hope you are all well in this new year!

We are cracking on with work on Vermintide 2, which includes the upcoming Chaos Wastes and, of course, continuing filling those hourglasses on the character select screen with new careers for the heroes! But this dev blog is not about either of those things. We want to take a few paragraphs to talk about bots - specifically upcoming improvements to bot behaviors coming to PC in patch 4.2.

Gameplay Programmer Ričardas will talk a bit about the improvements that he and the team have been working on in relation to some of the feedback you have given.

One of the tools bots did not utilize very well that players do is ranged combat. Whilst ranged combat is not the focus of the Vermintide 2, it is still a very useful tool that helps to ensure the party survives against the bad guys - specials in particular.

Sure they know how to pull the trigger but ranged weapons, unlike their melee counterparts, are a lot more specialized and have a limited ammo supply. Wasting shots on poorly chosen targets is extra painful. So in Patch 4.2, we have added some ‘target categorizations’, which should make bots better at dealing with specials if they are equipped with snipe type weapons (eg. handguns, crossbows), select more fitting attack type if they have such available (eg. fireball staff, bolt staff). So for example they shouldn’t fire handguns at infantry, and won’t try to kill special units with weapons like the Drakegun.

Good positioning is a hard thing to achieve since you need to take in a lot of information and make some predictions, too. For players we have a bunch of visual cues that help them identify danger like toxic clouds or streams of bullets, however, bots don’t see the way we do. So the way we try to keep our bots out of trouble is split into two parts.

Emergency Threat Areas are employed by bots to move them out of more dynamic threats. They tell bots that something bad is about to happen in an area and should get out as fast as they can, such as a Chaos Warriors hulking great axe bearing down towards their face.

We have made some changes here, as well as added and updated a bunch of those areas to help our fellow bots avoid and react more quickly to imminent threats. Also, we have tweaked the emergency threat response behavior to be less “panicky” which resulted in them sometimes slipping off cliffs.

Staying together is key to survival in Vermintide, making sure that bots stay close when a horde (or a patrol that someone just pulled) is approaching makes them more reliable at covering your flanks and saving you from a special. With that in mind, the higher the apparent threat on the battlefield, the more likely bots are to stand at your side, whilst favoring faster, sweepier attacks against infantry class enemies.

As a bonus, it also reduces the amount of times bots charging forward into hordes and incidentally running into your crosshair, but that will still happen especially when there are less enemies around.

BOTS BEING TOO COMPETITIVE ON RESOURCES:

For a while now, bots have been quite hungry for resources. We’ve made some tweaks to that in 4.2, such as restricting them from picking up ammo bags if the player is missing any ammunition, and made some adjustments to their dependence and willingness to picking up and chugging potions.

Patch 4.2 will be coming in the next few weeks, and with it are also some general bug fixes for bot behaviours, and with it we’ll compile patch notes that break down in a bit more detail the commentary above.

Sounds great, will have to be put to the test, but it seems like a good job; I leave you, I have to see the new trailer for Total War: Warhammer.

included in 4.2 which is coming sooner than you might think

Patch 4.2 will be coming in the next few weeks

Time for me to take a break

While all of that sounds good and promising, I think I need to clean some space on my hard drive for new videos of bug reports

I’m just a little concerned about the resources part. I think bots should take ammo unless the player is missing a reasonable chunk of it’s ammo (say, 30%?). It would be annoying to have to manually ask them to pick them up when a player is missing only a couple of shots. Ideally they should compare percentages there, with priority given to the players.

Likewise, sometimes a bot won’t grab a potion when it’s just there. I think the problem lies in bots considering white health a bad thing (which it isn’t really, unless it’s a bleeding state).
Fixing that would improve their behavior regarding healing supplies.
It’s quite frustrating watching a full white health bot using a potion just to turn that white into green. Or using a medpack on you when you are on the same situation. Priority should go towards: bleeding first, low health second, and temp health only if there’s spare supplies around.

Lastly: do you think any of these improvements could go over to VT1? Also releasing the mod workshop for it would be great.

To be fair, I think @Fatshark_Hedge might have meant 4.1.2 there, as we got the migration change the next day.

Thank you for Tweaking bots , i would love to see the results of your grueling work!

So any change to that because right now they are completly blind to it?

made some adjustments to their dependence and willingness to picking up and chugging potions.

Hopefully this applies to them healing you when you have more than enough temp health.

So they have finally accepted that a large portion of players like playing with bots.
I know they want to push player co-op and often times I like playing with other as well, but playing with multiple others does create a clash of play styles and sometimes that can be more frustrating than fun.
I often run bots myself so I can go at the pace I choose, get the extras I want and get to do the majority of the action.

They have specifically mentioned this just last week O.o

Ah, finally some much needed improvements.
Maybe the bots will even try to block attacks not meant for them, instead of always dying to an overhead I just dodged.
One can hope.
I do concur, though, that, when I have plenty ammo, and a bag hasn’t been picked up, and the bot has a snipe weapon and is out, they should at the very least pick up the dwarf droppings.
Hell, sometimes they even refused to resupply at a crate.

I’ll stop when the elf stops perforating my ass.

Maybe the bots will even try to block attacks not meant for them, instead of always dying to an overhead I just dodged.

Yeah bots have a tendency to eat attacks not directly targeted at them. It has been a big problem. You can even easily tell what is going to hit or not hit them it’s that predictable.

So they have finally accepted that a large portion of players like playing with bots.

Well it’s also a matter of bots replacing players temporarily in a lot of situations too, right? It’s not always a player or two just want to play by themselves (although sometimes those matches can be nice). Bots interject when a player disconnects or leaves and they can be there as a filler in the start of a match until more players join. So it’d be nice if the bot didn’t kill itself so quickly by doing things like:

Taking potions is fine because they always give them to players. Just remember that any item they can give a player, you don’t need to force them to “not pick up”. Ammo bags make sense, but make sure they always pick up ammo from infinite sources (ammo crates). Also take into account if the player has infinite ammo weapons like drakeguns/Sienna, a player running away from ammo, a player has all but one of their shots, tons of ammo bags around from Ranger Vet or something like Boom Boom suicide rats, etc. If a bot is missing 50% of their ammo and a player missing 1 of their handgun shots, bot should probably just pick it up anyways. In general, I have greatly favored bots being hungry for resources rather than purposely starving themselves.

All in all, sounds like a bunch of great changes for bots. A necessity indeed and it can only benefit this game and act to help Darktide too as time goes on.