Doesn’t seem to have been reported before, so hopefully it’s not a repost. Tl;dr here’s what happened: 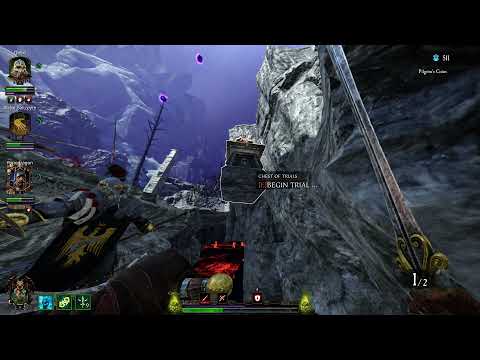 FK fell into into the floor at the very start of the map, as if he were submerged in the ground texture, but managed to get out. When we found the chest, it was submerged in a similar fashion. As we approached it, we fell through the floor and got stuck there, beneath the chest. We were hopping around trying to figure a way out when I decided to make a small recording. Eventually I had to kill the FK and then jumped around until a little rat managed to poke me to death.

This has been here atleast few times. One thread shows how to get out, by dodge jumping next to the wall behind the chest.

Fell under the map on Cinder Peak Vermintide 2 - Bugs

[image] The geometry around the chest of trials was a little… ‘under’-whelming… [image] The second image might make locating the area a little easier.

EXPEDITION OF FORTITUDE. A trial chest was in underground. When we approached to the chest we went through the ground, and we were stucked there until we left with the jump and the dodge. Video youtube: Warhammer Vermintide 2. Trial chest underground and ground glitch. Bug report forum fatshark. - YouTube Thank you.

Oh, there you have it. Didn’t show up when I wrote the thread title and similar stuff came up.