one of our most stable build releases to date

Big lol. I realize it can happen after such a massive patch, but it’s never been in such a mess. Didn’t get these many crashes at launch.

Hopefully we have answered some of your more burning questions.

I thank you for your communication and your time, but you’ve just talked about what’s in my opinion the worst feature of the worst mode of this game. I’d really like to hear something that’s not about weaves.

My most burning question at the moment is: Beastmen presence as it is in the old maps completely screws the storyline and the immersion (for me at least). Is this a beta thing, or it’s how the game has become now?

@fs-bigras I’d honestly love an answer to the last question, it’s not rethoric for me.

Why exactly does it break your immersion ? Beastmens are like another chaos army mostly, lore wise

I was considering making a separate post about this but I think this is a somewhat important point for a lot of people. I personally don’t mind the seasonal challenge frames but putting those extremely grindy challenges to the game mode (or to the season, even?) is very off-putting if you enjoy completing the challenges. Complete 40 weaves per career is huge, it would’ve been huge even with 40 weaves per character, especially with the underlying sentiment of the weaves where you’re supposed to go with the setup that works for specific weaves. Complete one of each weave with every career is similar (and it doesn’t even contain a tracker as of yet).

The cataclysm challenges (re-do legend challenges on cata) are really unimaginative but they’re not counter-productive in relation to the game-mode (which I believe to be true about the weave-challenges listed). @fs-bigras

I hope to not lost our characters upgraded, because:

May I ask why my level progress are reset for each character?
I cannot still understand we have to regrind 5 levels. Moreover you have deleted the mid-level progress.

I have to say that, besides many other issues, one of the things I’m disliking the most about this patch, is the addition of beastmen on the older levels. I’m not talking about gameplay difficulty, but story cohesion and immersion. It makes absolutely no sense. I could accept a few beastmen in athel, or in the herdstone section of Engines (if you are careful enough to remove the “we are lucky they are not here” line), but as it is it completely ruins the experience from a story perspective (mech…

to my poinst here i can add that we aren’t fighting the entire end times. we are just fighting clan fester, a very small, weak unlucky skaven clan, and right now a small tribe of northmen, guided until recenly by a small time chaos lord with delusions of grandeur and a lisp.

TL:DR it’s not that beastmen aren’t a nice addition, it’s the way the are used atm. You can read that topic if you want more details

Big lol. I realize it can happen after such a massive patch, but it’s never been in such a mess. Didn’t get these many crashes at launch.

I’ve been playing all day, only crashed on the new map when I had mods installed. Without mods, not a problem on that or any level.

I think thats the right thread to adress it.

I tried Huntsman yesterday and he is a joke compared to others.

For example the following talent desperately needs tweaks: “Master Huntsman”.
The idea is great but 3%? Are you serious?

With his little life pool it should be raised to minimum 10% and after a monster kill to let’s say 40%.

I’m happy for you but I’ve been crashing a lot, as a lot of my friends have, even without mods, and without steam file validation ever finding something wrong.

This is largely because we understand that our original design needs revision, which is now a process we’re going through. We can’t be clearer until we know where we’re at, but we want to let you know we’re making change.

With all due respect, we could’ve told you this months ago if only you guys announced what are you planning to do. I’m not sure how deep you are into the mechanics of seasons, but if you are changing certain aspects (now) based on the feedback you received from us, I’m guessing that it would have been better if you asked us about seasons and resets long before you even started working on weaves.

It’s one thing to be silent about a new possible map, weapon or skin. It’s a totally different thing when you wait for so long to present a very big and important aspect of a new game module that you spent a lot of time and effort working on.

We keep getting back to the same scenario:

FatShark: Hey, we gotta new thing that we worked on for a long time and we haven’t told you about it.
Big part of the player base: But… but… This isn’t something that we want…

Does it sound logical? (no sarcasm)

And here is a thought: Please start working on new maps, new skins and Emporium when you are done with WoM and seasons. Pick a best overall DLC that you launched (V1 and V2 included), copy that formula, apply it and be prepared to satisfy a lot of players

We haven’t done a lot of focus testing in the past, or at least that is my impression (I haven’t been at Fatshark for that long mind you). Not sure we would commit to having the exact same group of people in a small focus group. What we have talked about is doing more beta or alpha tests for our larger content drops, which with this release we have started doing.

I don’t see how you’re balancing weapons in big group. (And the last big group/group+group+secretgroup beta produced extremely poor results, for whatever reason, mainly the communication I believe) That’s not possible. Devs can’t do it, so what other option is there ?

Obvious solution I see is getting 10 or so very active and experienced veteran players that could do the proper testing. It’s free and relatively easy solution. You could just provide them with mod tools to easily tweak the weapons, they they would work on it, submit final results, dev would check it, done.

And if there are patches like the last one… then that group should test them also, I mean, can you explain me how that patch got how out ? Because it obviously got approved by someone who is not experienced in the game at all… because every decent player would see that this is so over the top broken that it can’t be released like that.

Some newbies will now say “Hey, it is better!” but no… what they mean is “It is easier” which does not mean better, at all.

Just to show off run with basically random talents, Legend without even having the full level, just click thru it and watch few minutes, it’s absurd, it looks like I’m playing Recruit or something with max level and full power. These kind of patches are just embarrassing, it should not get released at all and it wouldn’t if there was group that would actually test it for 5 minutes, literally. : 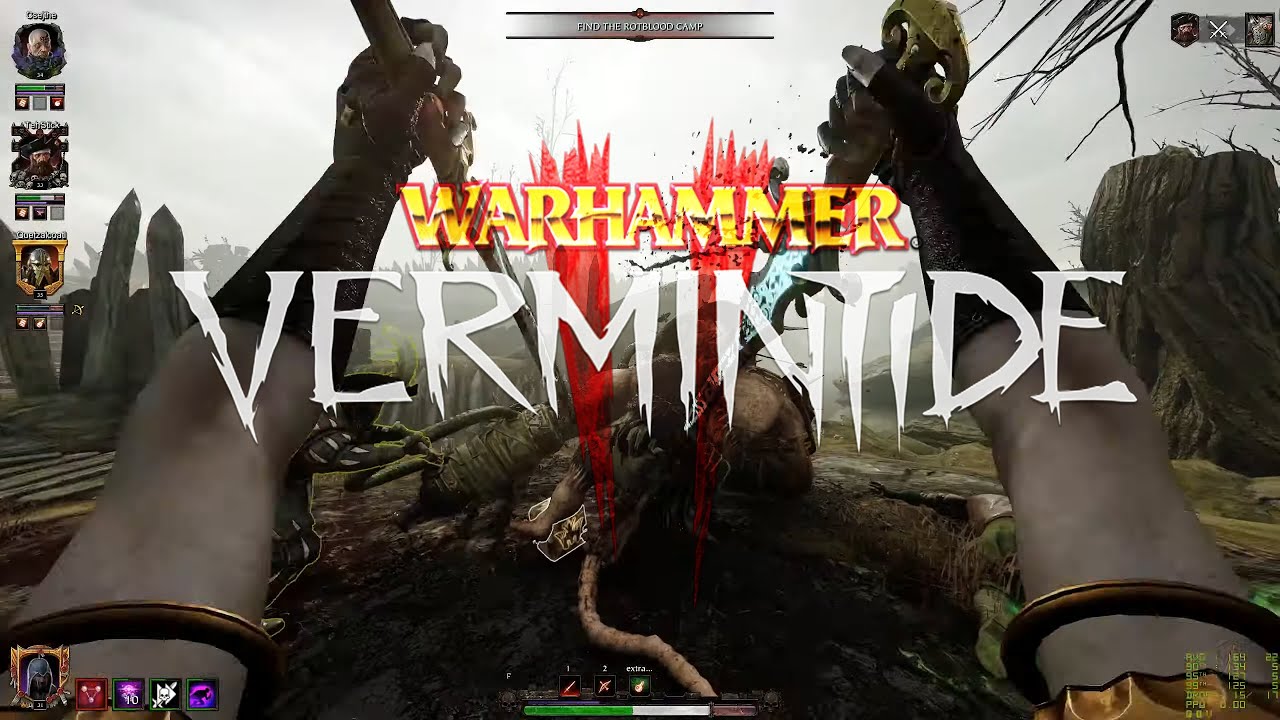 Apparently the shade is broken and this works very well together with the changes of the last patch.

Apparently the shade is broken and this works very well together with the changes of the last patch.

nono sir, kinda everything is broken now in this patch on Legend and lower difficulties, it’s not Shade

It’s just I didn’t play Shade much and I wanted to test some light weapon so I took Shade + S&D.

nono sir, kinda everything is broken now in this patch on Legend and lower difficulties, it’s not Shade

It’s just I didn’t play Shade much and I wanted to test some light weapon so I took Shade + S&D.

But with other classes or weapons you won’t get such “impressive” results.

Mostly likely they are testing the ceiling and the bottom of the stagger resistance values. If we go by FS M.O. , they try to find right values by doing the least amount of work, thus they change the global stagger resistance value instead of doing it for each enemy and/or weapon.
I’d presume that we will get a new patch in the first half of the week where they will put it to the value they originally intended, around 2.2.
They only used some psychology mumbo jumbo to let us experience both ends of the spectrum and then settle easier to a middle ground. It was the same when the dodge window was pushed to 3 second and everyone said it’s too easy and then everyone settled on 1,5 as a good value.
Don’t let be fooled by this method.

Yes, I get what you mean. I’ve wondered if this is why in the initial beta the stagger bonus was so high, along with enemy health. Clan Rats with 54 HP on Legend and stagger damage bonus up to 200% lol . . .

Reminds me of how old sitcom writers used to sneak in their most controversial material; surround it with even MORE controversial stuff, the censors would balk at that, and when it was taken out the original joke they wanted in slipped through.

O.o, the enemies in that video make the cata rats look like Sigmar Heldenhammer himself

Makes me wonder how it is on recruit, if it turns into a game of golf using heretics as golfballs

Glad to hear it!

to make Weaves interesting to me in the next season

We do, keep sharing!

Didn’t get these many crashes at launch.

Unfortunate to hear this time it is not going so well for ya, we get a lot of data on this and from that we can see this has been one of the more stable releases. We are looking to patch in fixes as we find and fix them.

Is this a beta thing,

This is not a beta thing, but that doesn’t mean we will not be looking at the balance of what is spawning and make adjustments

At times it might feel like we are not listening, we are, there are not a lot of us and we do what we can with the time that we have

Makes me wonder how it is on recruit, if it turns into a game of golf using heretics as golfballs

But with other classes or weapons you won’t get such “impressive” results.

I got similarly comical result with other classes also. It’s again about global change of major mechanic.

Don’t let be fooled by this method.

I got similarly comical result with other classes also. ***It’s again about global change of major mechanic.

Unfortunately I can confirm this.

Mercenary has not reached 35 yet.

2handed Sword was pain in the ass. Really difficult on Champion if you try to buff your group with some full swing. The slow attack speed opens many chances to interrupt and damage you, especially beastmen are faster than others.

Sword and mace in comparison was cheesy. Faster attacks makes your life a lot easier and you cut through butter. Staggering works also easier because your first attack counts as one. (Talent)

I think heavy weapons need an advantage, but currently I can see nothing here. Furthermore the range advantage is not helpful as it should be.