Sister of the Thorn

She’s absolutely gutted my enjoyment of the game with how incredibly brain dead easy she is to play combined with her strength. I play with a group of friends and one of them wanted to play her, and the difference between him playing somebody else and playing her is night and day. Watching a boss get deleted just because he slaps it a few times (Not even doing anything special, half the time just soaking a hit because he can kill the boss faster than it can kill him on Legend) and watching those stupid thorns impale any troublesome elites just feels awful as one of the other people on the team. As has been said a ton already, radiant inheritance is a massive issue, but I think a lot of her talents are just troublesome in general. (EG: Isha’s bounty essentially being a permanent 15% power boost with natural bond)

Can we for one, just for once, all agree that at least one thing here (Radiant Inheritance) is completely broken and needs a nerf in less than seven days (actually better less than 24 hours)?

I mean there should be multiple ways to “balance” this fast: longer downtime, less bonus, shorter duration, all of them. Or maybe FS has another talent in the backhand for this.

Other stuff can be discussed too. But this one thing should be obvious for everyone to be broken beyond help. Agree? Just once?

I’ve had, as most of us, a ton of fun running SotT at the weekend. Both new weapons are fun and powerful (too?).
I guess I have an issue with her description - support, really? Maybe she can’t delete bosses in 2 seconds, but does that make her support? She almost always dominates the dmg chart and kill count.

I’d agree with the crowd that says that radiance buff should be nerfed. Duration of 15 seconds means that it’s up 1/4th of the whole map, it’s short CD means that you can pop it up on every horde, every boss and most troublesome encounters.
Make it a lvl 35 talent - thornwall replacement - then it might be fine.
Or make it give her randomly one of the buffs - damage or speed or finesse - not and.

The silliest thing about her is that she absolutely is a support class,

If you choose not to deal any damage - yeah.
However you can do your CC in under a second and still deal more damage than GK & Bers combined.
That’s not a support-oriented career. It’s a DD monster who can also CC…

You do know that you can remap everything?

The catch is, players can only reach 1 of the above caps.

What do you mean by that? What do these caps represent? 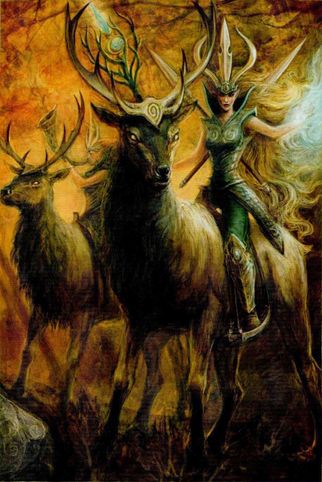 Sisters of the Thorn

The Sisters of the Thorn are Ariel's handmaidens. In many ways, they are equal and opposite to the Wild Riders of Kurnous, a sisterhood pledged to sorcery and subtlety where Orion's equerries know loyalty only to the glory of the hunt. Where the Wild...

It seems to me that they are more witches/huntresses than brutes like grail knights - it has little sense that she’s so butch.

I don’t think that he disliked it either. It’s more about balance. Sienna’s staff feels (and probably is) less powerful or less useful. Thorn staff’s alt fire insta cc is awesome for disabling distant specials. Sienna has to pull off a quite hard long distant headshot with altfire to do the same.

I play with a group of friends and one of them wanted to play her, and the difference between him playing somebody else and playing her is night and day. Watching a boss get deleted just because he slaps it a few times

This, though, looks more like trolling. She cannot tank better than IB, she goes down in a couple of good strikes on Legend and she’s not going to win the map single-handedly.

Oh yeah, kudos on the achievements.
Some of them look tough, but reasonably tough, no hitting a pink roger in a tutu with a crimson parasol on Tuesday…
They could’ve thrown something on top of those garbage coins maybe?

You do know that you can remap everything?

Yes, which is why I was replying directly to someone who wasn’t sure what the default keys are/were.

This, though, looks more like trolling. She cannot tank better than IB, she goes down in a couple of good strikes on Legend and she’s not going to win the map single-handedly.

As one example since I haven’t recorded it myself.

She is insanely busted.

That’s not a support-oriented career. It’s a DD monster who can also CC…

I’m not sure if you’re disagreeing with me here or what, I said that in my post lol

She’s just also an absolutely top tier DPS class on top of that,