Hello! We’re Fatshark, and we’re a game studio that creates four-player co-op games such as Warhammer: Vermintide 2 and Warhammer 40,000: Darktide . We’re looking to learn more about how our players and community members felt about our content releases in 2021 and what content they’d like to see in Vermintide 2 in the future.

Thank you! We really appreciate your input! 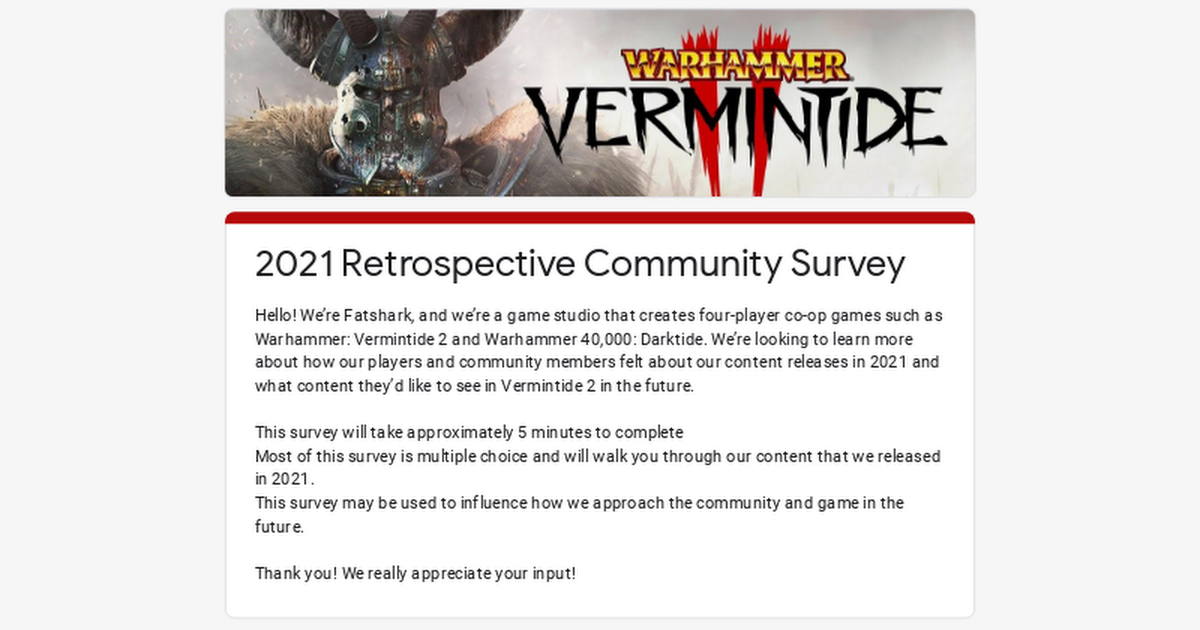 Hello! We’re Fatshark, and we’re a game studio that creates four-player co-op games such as Warhammer: Vermintide 2 and Warhammer 40,000: Darktide. We’re looking to learn more about how our players and community members felt about our content...

Would be nice to have an ‘additional info’ at the end for some short text we could write, especially ( at least for me) an addition about the favourite part of the Chaos Wastes. I would’ve loved to tell that the whole package, the multitude of different options mentioned is my favourite part, but evaluation of a simple single/multiple choice survey is way easier to do; you make cuts for time, i entirely understand.

Myea, feels little bit black and white on what to answer here. Its hard to pick from “what you least like from sister dlc” and I could say at least 2 things equally apply. Or what I like about wastes and 3 things almost equally apply.

Maybe its by design but I really felt like opening some of my reasonings here.

Yeah, it really needs a notes section. I left the parts of CW blank because I don’t care for it; I don’t play with other people much, and it’s basically a mode only for human players. I don’t think I’ve even completed a single run.

What I’d like to see, and what would make me play more again, is actual content for the real game mode. Can we get some of those Chaos Wastes maps brought over? Can we get grudge-marked enemies there?

I gotta say, honestly, the co-op nature of the game is never what has appealed to me. It’s the gameplay loop itself, the random nature, the high difficulty, the amount of craft that went into a lot of it to make it this well-functioning whole (where bugs don’t shine through).

speaking about survey, why theres no any text box for collecting suggestions?

Honestly, I’d rather see the Sienna career DLC postponed for a year in favor of a proper Big Balance and Bug Fix™ update. Depending on your chosen career and whether or not you play with humans the game can be an excruciating, overly punishing sensory overload torture grind or a brisk jog through marshmallow land. With the addition of grudge marks the problem is magnified tenfold, with a certain combo (still) ending the game 100% of the time.

I feel like our fantastic community managers go to waste because the percentage of suggestions reaching people who actually make decisions is really small. And while the intent here is good, the form you presented will polarize feedback to maybe one or two choices, with no possibility of written clarification. I have no doubt that once the data is presented to the chiefs the development effors will be directed towards the tallest column, and everything else outside the majority is pushed to “near future”.

Sorry for ranting but I personally can’t bring myself to play the game outside of DLC additions anymore.

The biggest thing that annoys me is playing with bots or having people joining in late since those are lacking the boons to provide any sigificant value. Late joining should give you a compensation in coins or a selection of boons to get to equal power level as the rest of the team.
I’ve chosen the “run experience” answer since it categorises my problem the best.

+1 for the text boxes requests

On a mostly unrelated note, is there any hope of you guys at Fatshark adopting a few more mods, like like UI tweaks?

It doesnt seem like its getting updated anymore which is really a bad thing because the UI it provided honestly was an improvement. Like clearly signaling if someone was in grey health or not or if they had healthshare etc.

I personally really liked that i could toggle ammo display to be active even when i had my melee weapon out.

Why did you make me choose between chaos wastes and warrior priest as my favourite?

There really should be textbox or some added claryfing questions. Like for example I think SotT nuke ult talent needs some balancing, would one choose talents or ult for improvement?

Also does improvement mean just “what do you think needs buffing” or (as I interpreted it) “what needs to be looked at”?

Wow people weren’t kidding. This may legitimately be the worst poll I have ever seen. The vast majority of the questions didn’t have an answer that actually aligned with what I wanted to pick. People have been complaining about the power level of SotT forever and you didn’t think to include her power level as an option for what you don’t like about her? Also no indication of why you don’t like the career skill? Like I picked that option because bloodrazor is absolutely dummy OP but I have no idea if that’s how my response will actually be interpreted.

If you don’t have the manpower to process a poll with a type your own response option, you need waaayyyyy more, better, and clearer options.

I’m sorry to whinge but I’m genuinely angry after doing that poll, what a travesty.

There is no freeform due to the fact we have over 20k+ participants, so we needed data that’s easier to parse at that magnitude.

Do you think we could get to see the results in some form of a graph? I am kinda curious.

I’d like to see this happen and push for it internally!

The survey should have had the possibility for multiple answers (even max 2 or 3).