Everyone wants a proper hat I guess. You should see the thread complaining about how all the characters look like troglodytes lol

Hat covers face np just got to get that hat

My vet is too vain to wear helmets 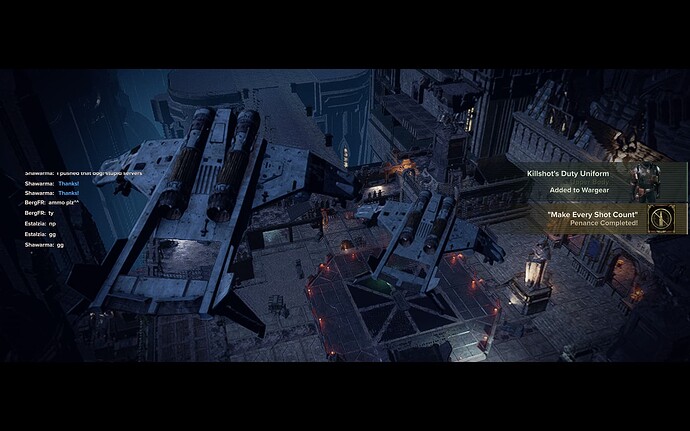 Took 5 more tries, unfortunately using a shotty failed miserably for me, as the hipfire shots did not show a hitmark on several occasions, and I just assumed it wasn’t gonna give it to me. Switched back to plasma gun and just drudged through it one last time as I kind of internally gave up at this point. This probably relaxed me a bit more throughout the game. I kept being meticulous about just firing into stragglers and hordes, did not risk ANY elites as they have some unpredictable pathways/movement sometimes (switching aggro), but what personally helped me a lot is actually picking the automatic reload feat with a volley activation. This really helped me dump the ammo pretty early on in the mission, as the only time I actually reloaded manually was to vent the gun if it got too hairy.

Worth noting: lagged out about 3-4 times where my shot didn’t subtract any ammo and there was no hitmark, but it still completed the penance after all. Had about 130 rounds regained from the feat and as you can see it was on the Throneside mission.

Still a strong believer that this should be totally redesigned. This was unnecessarily frustrating, and I’m angry at myself for being a completionist and coming across this bs, and pouring way too much energy and time into completing it.

if this game had a third person mode, i could care about skins. how it’s now, i don’t even see my skin unless i am in the lobby or open my inventory.

nevertheless, penances should improve teamplay, not force you to be a hindrance to your team.

there are missions, like the ammo raid, where enemies spawn indefinitely. but i dont know if it still works.

maniacal psyker laugh with german accent
First time? Try to do any of psaker’s and not actively screw your team.