China is suppose to have a man portable laser ‘rifle.’ They say it’s not strong enough to kill a man, but … Actually I forgot what they wanted to do with it. 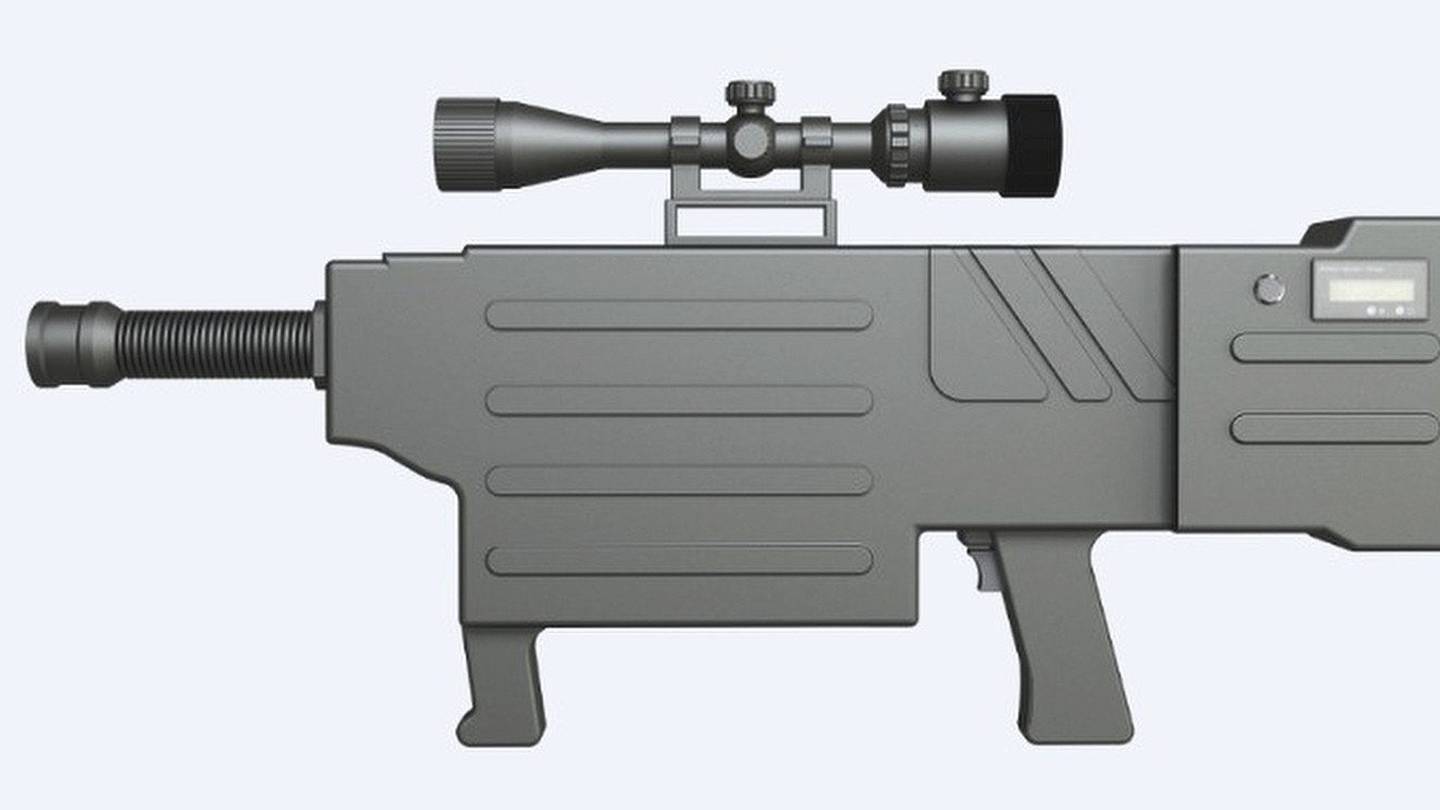 China has built the world's first destructive laser, capable of setting clothes on fire and detonating fuel tanks- but it can't kill people- yet.

US military has them for shooting down missiles. Used to have them in 747s. Never heard anything about recoil of any kind though. They had a mirror turret in the nose to direct it in any direction. Those I heard were retired, but they learned a lot.

US Navy has laser cannons on some ships.

Someone call Lockheed, and/or the PLA, explain they are asking for a game forum, and inquire about the recoil off their lasers.

I’ll be honest I didn’t keep anything, and I apologize for that. I’d dropped it as soon as I realized Orson was going to defend a stance by obfuscation.

I’ll accept it being called a copout rather than get deep into this discussion again, but if you’re curious about the recoil of laser guns and such, I’ll hijack someone else’s work.

h(Planck’s Constant)c(Speed of light)/λ(Wavelength) for the energy of a photon.
For the momentum of a photon we want h/λ
We can model off of 5.56 from an M16 as a baseline for the power we want from this theoretical lasgun, that gives us 1800J to work with.

Ultimately if people are fine with “it’s a game mechanic” none of this matters, but a flashlight has recoil, it’s just negligible. There are a lot of other factors that go into just how negligible, like photons that manage to not deal with any air particles at all in atmosphere, among other things. The point is just that lasers do, in fact, have recoil.

Kinda puzzling that you’re talking about obfuscation and then insist on using energy of a bullet when talking about recoil impulse.

In return however, let me elaborate on how I got to this:

But if we step away into the mass-energy of a massless particle territory, we can quickly see that the power capacity of the lasgun must be about 18GW in order to generate a ‘kickback’ impulse comparable to that of a 5.56 NATO round (that’s assuming the pulse is 1/60 of a second long, or one ‘frame’ for convenience).

5.56x45mm NATO rounds indeed have energies in the order of 1800J a pop. I didn’t look past Wikipedia on this one. But what I was interested in is the impulse - because that is what the shooter feels as recoil.

Since impulse is a change of momentum, and we assume that initial momentum of the bullet is zero, we can calculate total impulse that the bullet carries forward as its momentum at the muzzle.
Let’s take the first entry from the ballistic performance table:
0.00956kg * 993m/s = 9.49kgm/s

Now we need to do the same in reverse for a laser beam. Momentum of a light pulse is E/c, where c is the speed of light in the medium. We’ll take vacuum for clarity:

Then I assume that a single lasgun pulse lasts for 1/60 of a second (arbitrarily), so the power generation required for such a pulse comes out at around 17GW.

But we can go a coupla steps further and assume that the lasgun fires twice a second (from what I’ve seen on YT), so we can estimate that the lasgun must be able to produce 5.7GW of power to be able to fire light pulses with recoil comparable with that an assault rifle cartridge. And that is assuming 100% effeciency of everything inside, which will never be true.

In reality military grade fiber IR lasers approach 25-30% efficiency, so we can ballpark the power of the lasgun to be around 22GW or 1/4 of the entire US nuclear power generation capacity in a lightweight handheld unit.

Was I wrong for not doing so from get-go? No for ‘good enough’ back of the envelope illustration reasons, and very yes from the POV of more anаl-retentive readers (myself included to some degree). So I apologize to @Annyliese for that last one.

TBH this is the main problem with lasers today. If we had ‘mr fusion’ we’d have laser rifles. Coming up with the juice to run the thing is hard.

Now, I typed ‘do lasers have recoil’ into a search, and what I came up with was a lot of math that was over my abilities. The people doing the math said that the end result was yes, but the amount they have is like the landing of a large butterfly. microscopic amount of pressure, and the laser being calculated was the air force’s 747 laser.

Now, I typed ‘do lasers have recoil’ into a search, and what I came up with was a lot of math that was over my abilities. The people doing the math said that the end result was yes, but the amount they have is like the landing of a large butterfly. microscopic amount of pressure, and the laser being calculated was the air force’s 747 laser.

Yes, this is basically what @Annyliese calculated for a laser carrying the same energy as a bullet. I did a reverse draft where I started with the recoil as seen in the gameplay vids and got the power number required to do that, that is way beyond plausible even for a sci-fi setting.

Well, TBH I’d be okay with that much recoil as long as I get that much output. I should be able to kill a whole horde in one shot, if I can get them to stand in a straight line.

Kudos to you for responding, I genuinely thought it was a copout originally.

I wasn’t arguing against lasers having recoil, but rather that the recoil they have given them seems way, way too much, which your calcs, Orson’s and the ones I did back when we started this discussion seem to back up (though I used a handgun as a reference not a rifle and power equivalent to the entire US nuclear power generation capacity, still came out to way less than the handgun in terms of resultant recoil)

But you’re right, the way they blow off limbs etc. doesn’t fit even so, or the lack of interaction with air.

I think the idea suggested further up in this thread by @Rubric94 that they are not actually laser weapons but simply named such by people who do not know or have forgotten how they should work is the most plausible and elegant solution that has been provided.

I think the idea suggested further up in this thread by @Rubric94 that they are not actually laser weapons but simply named such by people who do not know or have forgotten how they should work is the most plausible and elegant solution that has been provided.

In the novel “The first and only” first book in the Gaunt’s Ghosts series, the weapons are referred to as lasers specifically. Additionally, the troops know how things work. They still say prayers to the machine spirits, but they do understand a fair amount about the machines.

At one point they are working with another unit which uses unusual glass fiber armor and they use the armor as an insulator to stop electrical current to a automated rail system train. (At which point Gaunt loads his men into the train, they pull the insulation off the rails, and ride the car all the way into the enemy base.)

The writer, Dan Abnett, is one of the bigger writers in the W40k universe, and his presentation suggests that the ignorance of the common man to technology has perhaps been exaggerated, because many of his characters have a working understanding of engineering at least to the point of 1950s technology.

Because in multiple books they infact do have recoil, this isnt really an argument you can push towards fatshark its something you can push at Gamesworkshop but either way it also is a balancing factor within the game so i see no issue there if my space gun from a universe that doesnt care about the exact science of things that can kill the enemies with well placed shots has difficulty when firing constantly.

I think that adding a “Heat” mechanic would be a great addition and a good answer. Remove the recoil and just add a overheating mechanic.

I don’t think that completely removing the recoil would be good for the game balance-wise; but there must be a good alternative.