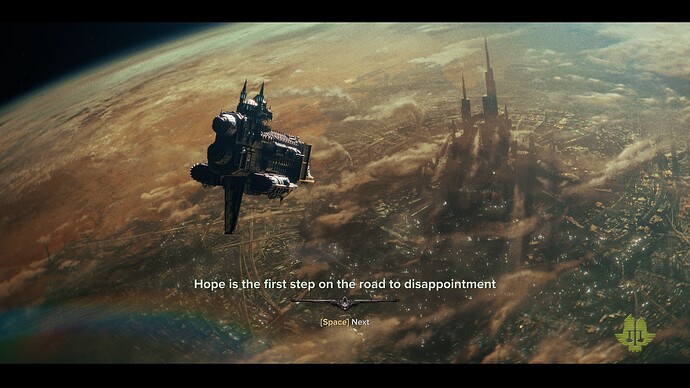 Hey everyone I was in a coma for the last 4 weeks, they fixed all the bugs and rolled out the promised full crafting system, right?

Not only that, but there is a twenty (20) mission campaign now. And the number of voice lines has been quadrupled!

Also all the character traits work as they say. Crashes are nonexistent and the servers run buttery smooth!

I dont see how the devs can fix community grouping tools at this point. Everything that even remotely creates accountability is construed as toxic by some loud mouth minority of players. If they let you form a fireteam, what if some one says something mean on the next mission? What if they drop mid game or grab/dont grab the book you want.

The devs should be ignoring the vocal minority here but they are not. In fact they are embracing them and that’s why we have toughness/coherency.

Also let us stay as a fireteam!

Yeah, I really don’t like that teams break up at the end of missions. Running multiple missions in a row with the same people in V2 was such a strong feature for building comradery between players, not to mention making the next run start faster and smoother. It’s one of those features that has such a huge impact on how you feel about the game as a whole, despite not affecting the mechanics of the game.

A lot of people seemingly don’t have the confidence or motivation to vote to stay together, but V2 proves that they’re often quite happy to stay together if that’s the default.

Breaking up after every mission makes the game feel sterile, empty and disjointed.