especially for somebody so eager to start spouting personal attacks instead of making arguments.

In my thousands of hours of playing V2 I have only met TWO people that combined chat flaming and clearly intentional teamkilling, completely without provocation, and he is one of them. It’s no surprise that he’s also like this outside of the game. Don’t bother.

Anything proper would be sequel territory, unless Fatshark decides to surprise me…

It’s possible they’ll add undead. It’s something that’s been on their list for quite a while, and while the investment won’t pay right now, it’s something they’ll have and they could use in the future (like in VT3). I’d certainly not rule it out.

I entertained the same opinion for a long time and thought of Vermintide as a trilogy, given the first game’s ending. There, the narrator mentions the Empire’s borders coming under assault from the skaven, the chaos warriors of the north and the living dead. However, given the way Verm2’s development branched out over time, I’m guessing the plan is to include everything here in whatever capacity is possible. Making a “sequel” to Verm2 that feels bigger and better would be a very daunting task given the sheer amount of content they’ve provided in the form of maps, weapons, game modes and careers.

In Darktide; there will be a lot of “zombies” (poxwalkers, to be exact). Actual update for game mode we have? What madness is this? And even the additions suggested don’t sound too bad but obviously it will depend on the final implementation.

So I guess we won’t see Victor as a Warrior Priest or Knight of Morr at the end of October?

they won’t add undead just for a small set of maps or a boss fight either.

Hegde said more is coming, we just have to be patient and see what that is. I bet a career is coming. And if it all goes wrong, I’ll just blame Okri. It’s not like anyone’s to know better, is it?

This has to go wrong somehow

an unspoken whiff of romance between Cerrilian the archer and Kroober the proud knight. All carefully separated from reality, and thus old Franz safe from the doghouse.

Damn it Fatshark don’t encourage that subsection of the subreddit

Damn it Fatshark don’t encourage that subsection of the subreddit

Its probably safe, they didnt have a visible reaction to kruber sunbathing in the nude on the roof. Couldn’t find anything on the dwarf, except there are miniatures of him, so he should be quite famous, shouldn’t he?

Not necessarily famous but it seems to be a name from some mini-collection. The name of the mercenary captain is also part of that although harder to find 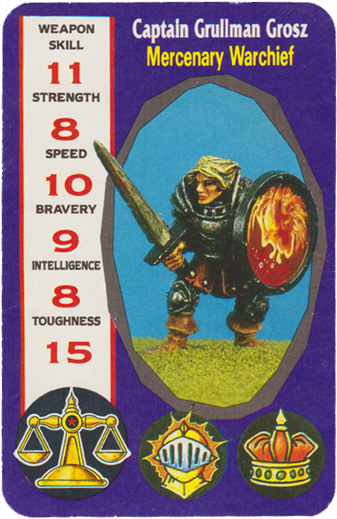 Huh, neat. Well now I definitely don’t know if Grossebad is where Kruber lost his regiment or if there’s a necromancy connection.

I thought about the same. It is really hard to tell. Because I think Kruber was the sole survivor of that fight. And Grullmann is a Mercenary Captain while the Necromancer wipe happened before Kruber became a Mercenary. Of course it is possible that both went Mercenary afterwards.

For the moment I think that it refers to something else. It would probably help to find out where Grossebad actually lies. Empire for sure due to the german name but other than that?

Grossebad features as a town in the enemy within a campaign for 1e warhammer fantasy roleplay in 1986. It was often published as a bundle with shadows over bogenhafen and details the chaos attempt to overthrow the empire . Grossebad is “not far outside of Altdorf” according to the fluff.

For VT1 vets Death on the reik was often part of the trilogy of campaigns and was also part of the bundle.

[edit] haven’t found my copy of the map yet. It’ll be online somewhere surely.

Since this is talking about lore there is a current Book Bundle with Warhammer Books (seen on Reddit, shame on me). It is quite cheap. So even while I am not needing it, I am thinking about buying just for some background knowledge:

Gather your party and face the perils of the Old World with this vast library of Warhammer Fantasy Roleplay rulebooks, sourcebooks, and adventures. Plus, pay what you want & support charity!