F*** the rotations in this game

Seriously!!!
Who decided it would be a good idea to put EVERYTHING on a rotation in this game like in some kind of F2P mobile game?

Did anyone think it would be a great idea to…
…have no real loot drop in the game expect the weekly capped emperor’s gift, and put the shop elements on a 1 hour rotation? You want to get a nice power sword or a flamer? Or maybe a plasma gun? Naaaaah kiddo. You either run the game for 24/7 and hope one pops up and isn’t a trash stat item in a few days or a week, or you can just give up

…put not just the missions you have available on a timed rotation, but even their specific level!! You want to do a specific mission because you either like it, or just need that one to complete an achivement? Naaaah kiddo. Just let the game run in the background and check on it from time to time, maybe there is a mission you need on the level you need. It isn’t well f you!

I tried to defend this game and it’s questionable designs till now but getting stuck with weapons i don’t like to play with on missions I don’t like or progress i can’t finish because the game doesn’t let me do it is some next level bad design.

If you want to have a mission rotation, at least do it in the way Deep Rock Galactic is doing it. With the option to select the desired difficulty.

If you want to have a shop on a rotation, at least give us the option to craft items from scratch. Like in VT2.

At least the chance for a decent axe is not bad ^^

If you want to have a mission rotation, at least do it in the way Deep Rock Galactic is doing it. With the option to select the desired difficulty.

Given Darktide is clearly an unfinished, unpolished mess of a game right now I might just put it on the shelf for now then check back in 6-12 months. In the meantime I’ll get back to some ROCK AND STONE instead.

I support all your points sir!

…put not just the missions you have available on a timed rotation, but even their specific level!! You want to do a specific mission because you either like it, or just need that one to complete an achivement? Naaaah kiddo. Just let the game run in the background and check on it from time to time, maybe there is a mission you need on the level you need. It isn’t well f you!

Don’t know what is the problem with this 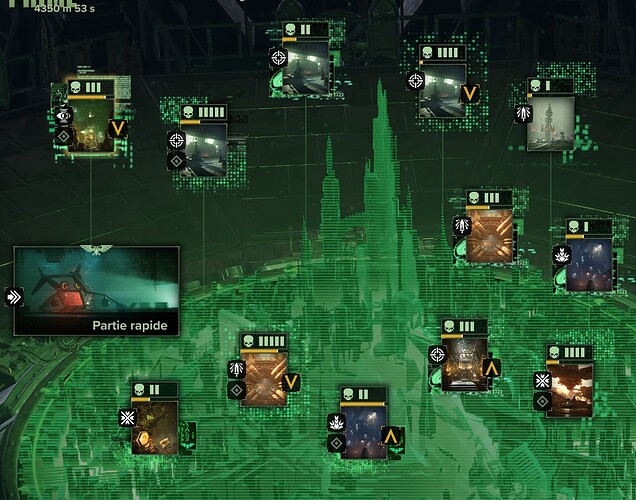 It gives me pleasure seeing each day more people blamming this stupid decisions they made going backward. People noticed it before, but now that most player base is reaching their lvl 30 and notice this stupid way of playing, its becoming a trending as it should have been since day one. Add to this the feeling of playing 3 maps constantly. RNG in shop, etc… And all of this for 40 € compared to V2 at his launch.

Its a bad joke to consumers.

As people say when you try to highlight the grotesque weapon and curios store rng.

Why don’t you like… Just play the game and have fun!

And your answer should be: The gameplay in missions is fun and visually stunning, but all the fun is sucked out by the rotten supporting systems which permeates throughout all of Darktide.

I remember when you were in Steam Forums telling us this and that on how great Darktide is, while talking down on anyone who raised criticism on the game; changed your opinion, have you?

At what point in time did it become a bad thing to get more enlightened and thus change your opinion to reflect said enlightenment? If anything, that can only be good.

That means the uproar is only going to increase and force a reaction from Fatshark.

At what point in time did it become a bad thing to get more enlightened and thus change your opinion to reflect said enlightenment?

Where did I imply it was a bad thing? I’m sharing an observation of how hostile @Nihil was towards those who were able to pick up on Darktide’s bad systems early on.

The fact is the mission generation is a joke. Half of the missions on the map are no interest for me or our usual gaming groups. Why would I play level 1-3 difficulty levels on a maxed out characters? They are just used by people who insist on farming the influence tokens on all their characters every week. Sad.

We end up REPEATING the same maps we just played with the same modifiers, because after completing the match we have no new options left. The game feels like it offers 2 maps at times.

Players DO NOT like randomness. We fed that back when we had the whole V2 loot randomness discussions, where people couldn’t get specific weapons, trinkets or item rarity/quality due to the RNG. Instead of fixing this we got RNG in other areas of the game. Areas where we previously had control, like the map and difficulty selection. How can experienced game designers think this is a good idea?

Your contracts blow. I dropped 2 power swords since the game launched, a buddy of mine ZERO. Why there is no contracts which reward you with weapon blueprints for those who want to avoid the loot RNG?

At the very least we want to be in control of choosing what MAP, what DIFFICULTY and what special CONDITIONS (no power, no air vent, high/low enemy count) EVERY TIME we select a new game to play.

I’m pretty sure you are confusing me with someone. Was never hostile to anyone criticising the game.
On the other hand, i also don’t see any issue with someone re-evaluating his/her opinion based on more experience gathered with time.

Listen I don’t want be that guy who goes through your search history and screen caps your posts in order to prove a point, not interested in that type of behavior. Just know that I’ve seen your demeaning posts in Darktide Steam Forum.

I get it that they somehow tried to explain the “why” behind it somewhere. That because unlike Vermintide, this game has dedicated servers, and it would mean too much load on the servers to have all the missions available on every level all the time, i pretty much call it a nonsense. It works just fine in every other game. And the sessins are not up constantly. Only during an active game.

The only logical reason would be that it divides the playerbase more if the selection is bigger in missions. But for that…there is the solution of lobby browser.
This mechanic is simply stupid. Again it can work fine, like in examples i mentioned. But somehow i feel this is only an artificial way to extend playtime. Which will eventually backfire if people get bored if this and leave

You can. Again. I’m very very confident you confuse me with someone. Not to mention, this name is freaking popular. Also name a person who never argued with anyone on any forum. What’s the point exactly?

I’m not here to harass you. I’ll drop the issue entirely.

But as to the why you answered your own question.

The rotating cash shop requires players to be in game.

The crazy RNG mechanics with the shop achieves just that.

The lack of missions at the terminal is to not dilute matchmaking queues.

I’ve been waiting for a week to be able to do a distuption dannation mission, but I can’t find it, Need only one Mission in dannation , this rotation system Is a pure s.h.*t