First thing’s first, I’ve been really enjoying Darktide. Super fun, extremely satisfying, and gorgeous. The more I play though I feel like the design choices for enemy spawns sometimes feel odd. I spawned into a mission that was already in progress, admittedly not much progress though as when I loaded in I was standing at the Valkyrie. I attempt to move forward onto the bridge, the one being guarded by two Leman Russes, to catch up with my team and I’m immediately met with a mutant spawning in the same area as the Valkyrie. I can deal with him but I make it onto the bridge and am ambushed by two more specials, a flamer and a hound, both coming from the same direction as the initial mutant. 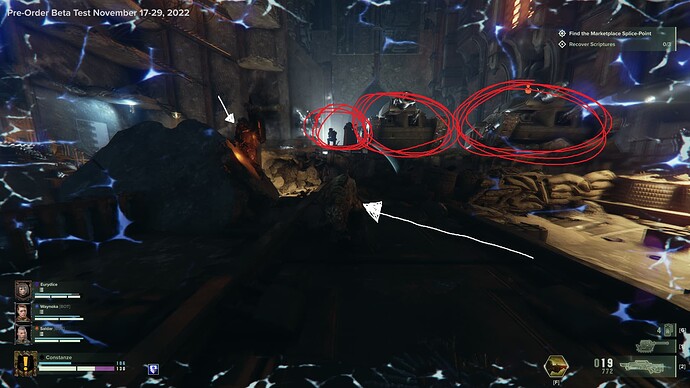 I apologize if the image is unclear. The white arrows point to the traitors currently mauling me to death and the red circles are my “allies” who have supposedly secured this side of the bridge. Does anybody know if specials spawning here is intended or did I encounter some bizarre bug?