This will be a long one, quite possibly a bit more philosophical. But let’s brainstorm a little bit and I’d like to hear your opinion.

Whether or not Fatshark will introduce new heroes/careers I’d like to entertain the possibility of getting at least one more character.

I was pondering about possible new career choices for mages, and besides my favorite Shadow mage idea, I started to think about Azyr, the Blue mage.

Azyr , the Lore of Heavens is the Blue Winds of Magic , and it is said to be a manifestation of the Aethyr’s reflection of inspiration and that which is out of reach. The magic of this Wind is based upon knowledge of the unknowable and the manipulation of the skies. This magical lore, also known as Astromancy , is practiced by Magisters of the Celestial Order to divine the future and pluck the strands of fate.

Read more about the Azyr here.

So, manipulation of the skies, divine the future, strands of fate… The easiest way to go here is to say “Well, they manipulate the skies, why don’t we just make them shoot lightning bolts”. This is true, but it’s kinda boring and not exotic enough.

Let’s take a look at a couple of Azyr spells from the 2nd edition of Warhammer FRP. Plase keep in mind that WFRP is a tabletop RPG game, thus the spell descriptions should not be taken quite literally. Use a little bit of imagination and think about how you would implement those spells in a video game such as Vermintide.

Ok so this is an interesting one. Imagine hearing a gutter runner sneaking around. You pop this spell up (or maybe it’s a talent with highly limited usage) and you actually get to see the “future”, i.e. you see the outlines, the so called “ghost” of the gutter runner and the direction he will come from within the next 10 seconds.

Azyr_4466×502 442 KB
This one doesn’t have much practical usability in a game like Vermintide, but I’m gonna leave it here for you to discuss it.

This sounds like a great crowd control/stagger spell. Imagine the possibility to evocate such a strong gust of wind that you would be able to blast through the hordes and push enemies of the map

Now this is the one, the game changer. Ignore the big wall of text and just focus on: You use the mightiest of magic to alter the course of fate itself
So how do I imagine this one? Something like a Slow Time spell from Diablo 3 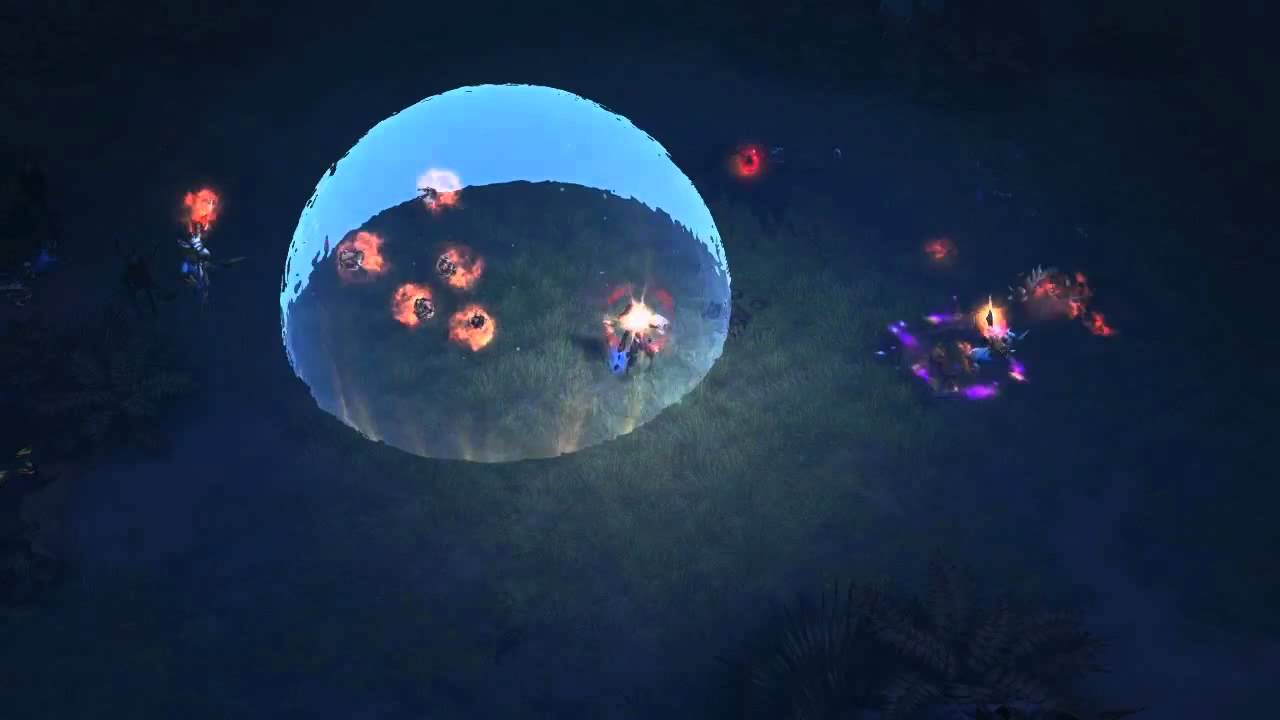 The blue mage creates a time altering bubble around himself. The time is slowed inside the bubble. The mage can move and act in normal speed, but everything else inside is being slowed down, while the rest of the players and enemies outside the bubble are moving and acting in normal speed.

Not a lot of multiplayer games use this feature. Because of its mechanics, you have only 2 ways of implementing it:

What’s your stand on this? Do you think it’s cool and more importantly, do you think that it could be a good addition to Vermintide?

I have always thought the slow-down was cool and beneficial for many games, particularly for avoiding ranged attacks. In Killing Floor 2 you have “Zed Time” where you will trigger a second or two of slowed time where you can acquire targets and have a moment to breathe before the action resumes, which is nearly necessary considering the ridiculously tight shift you have to run in order to survive their more difficult game modes.

I think I remember a similar topic a few months back and I’ll field a similar opinion here: I’m rather against the same sort of mechanic in Vermintide. The flow of Vermintide is extremely important to survival because each button/click is pressed about half a second (or less) after the last one; if you delay that, you could single-handedly kill your ally.

Block-push-pushattack-attack-dodgeleft-attack-block-push-pushattack-dodgeleft-attack-attack all happens so fast… if suddenly your combo was interrupted by the entire game slowing down to half-speed, the player must then double the time between button pressed. Power-attacks are bound to the same key; if you hold them down too long you’ll initiate a power attack you didn’t want and have no way to cancel it, even with the slow-down.

The only reason a time-slow effect like that works is if it’s used by an enemy and meant to slow you down or, like in Diablo 3, it’s used by an ally and doesn’t affect you anyways. It’s mostly IMO, I guess, bit I don’t think I want any time-slows in Vermintide.

The only reason a time-slow effect like that works is if it’s used by an enemy and meant to slow you down or, like in Diablo 3, it’s used by an ally and doesn’t affect you anyways. It’s mostly IMO, I guess, bit I don’t think I want any time-slows in Vermintide.

I agree that a global slow-time would kill the overall flow and mechanics of the game, so the Diablo 3 “bubble” approach would be more practical.

I remember in Baldur’s Gate you could stop the time and cast spells, when the effect ended all the spells are cast at the same time. This is incredible!

An ice witch would be a good option too if you want to slow down enemies as well.

I remember in Baldur’s Gate you could stop the time and cast spells, when the effect ended all the spells are cast at the same time.

Well, Baldur’s gate combat was turn based if I’m not wrong, same as its spiritual successor, Divinity Original Sin.

Well you are wrong it was realtime

Not technically speaking; characters still treated the game as turn-based and took surprise rounds, acting out of initiative if they hit a fight at a weird time and then falling into their proper initiative. It was why getting a spell interrupted while casting was really bad; your mage would then just sit there and stare at the enemy for a couple seconds before returning to attacking.

The game was still turn-based, it just looked like it was happening in real-time. As well as that, you could forcibly override turn-timers by clicking on abilities and forcing the characters to act immediately instead of waiting to default back into initiative.

Then again I might be crazy and have made all of that up in my head, but I feel I have a pretty good grasp on the game. Every year or two I boot up a new BG1 campaign and go out to crush Durlag’s Tower with 3-4 party members. Vampires are the worst part of the tower aside from the ridiculously dangerous traps because Minsc with the Boots of the Cheetah and a potion of haste makes for a sad wizard.

@Angerblaze I think he meant ‘stop-time’ as in the spell, Time-Stop, which allowed your single character to cast a whole bunch of spells and then your Time-Stop would end and, usually, every bad-guy in the room would promptly explode.

You know in same way diablo was turn based, but thats no matter its offtopic.

I think Azyr would be one of the coolest lores to get into the game, precisely because of its unique qualities - I could imagine flashes of “precognition” that show special locations sometimes, or pickups, or an early warning of hordes/bosses. On top of that, it’s the lore that would get all the other cool magic elements into the game - ice, lightning, and wind. Who DOESN’T want to go Emperor Palpatine on a horde with some Chain Lightning?

Still, slowing the game? Not sure how well that would play. It could function in a bubble, like you suggest, just slowing enemies within it. In some ways that’d be a cool CC option. But it could also throw off a lot of timings for things.

I absolutely agree that Azyr is one of the most awesome Winds! I’m a big fan of the idea of the time slow that @Angerblaze mentions so long as it doesn’t afflict allies; if it is strictly against enemies in a bubble or globally I think it could make a fine addition (and then can become a point for how intense the slow would be for balance purposes). If it can goof your teammates by negatively affecting their gameplay, I think we’d have a bad day between the potential griefing and accidental deaths and it would become a negatively viewed mechanic.

@Perteks Well, no, not at all. Here’s a few links explaining a few game mechanics like Attacks Per Round and how it can be affected by an Oil of Speed and how rounds are counted. Visually real-time but mechanically turn-based for all intents and purposes!

Well diablo same is ‘mechanically’ turn based. And you can have your turn action in middle of his, this is real time still, turn based game works differently, your action is stopped when somebody have his.

It’s 100% true that the game was originally designed to be turn-based and that the same engine was adapted to make it appear “real time”. For those who haven’t checked up on it, btw, @Perteks is absolutely correct that it is a cool read and how David Brevik meshed it together was nifty.

I think the big difference is that for the turns in Diablo, you move and attack when you click with the only potential delay being your character being staggered/stunned vs Baldur’s Gate where you can only take actions in-turn. I believe this was why it was so revolutionary; the game was redesigned to not be functionally turn based despite operating on an originally turn-based engine.

I’m going to exaggerate a bit to convey my thoughts on your post:

“I WOULD PAY TRIPLE THE PRICE OF THIS GAME FOR THIS DLC, IF IT MEANT BEING ABLE TO PLAY THIS CLASS WITHIN THE GAME”

This would get me interested in this game again… more than I am currently at the very least.

what’s missing for me are new heroes and champions. It was a delight to read the excerpts you listed on the various skills of this proposed hero - I’m new to WarHammer, so I really appreciated that. The one thing I could see this class doing is adding strong CC mechanics to the game which I feel it could use a lot of - but that’s my opinion.

Most of all, this mage sounds like they would be a heck of a lot of fun to play. Great Idea!