I feel like 500 hours in VT2 give me some basis to make valuable suggestions. And yes, there are people with more hours - good for you!

Make characters spawn in the center of the keep, not the entrance. It becomes a huge annoyance, when you can’t find a game right away. A lot of times you join a game, enter a keep, find out that the host is AFK and leave again. Rejoining that game 2 minutes later…

PLEASE implement an option to open a lot of chests at once. I currently have over 150 chests in my inventory. Each chest requires 1 click to open and 3 more clicks to take each item. That’s 600 clicks to open these chests. I am not going to do that, so I’d rather leave the contents untouched than go through that hustle.

Which should tell you something about the incentive power of the chests - it doesn’t exist. Farming chests is nothing I care about at this point. Quite the opposite, I am annoyed by having to wait for the chest animation after each game to finally be over.

Speaking of incentives. Personally, I would like to invest my progression into repairing and upgrading my keep. Before you judge that introduction of an idea, hear me out:

Imagine you can spend your experience on repairing the keep:

Here’s a very very simple visualization of the idea: 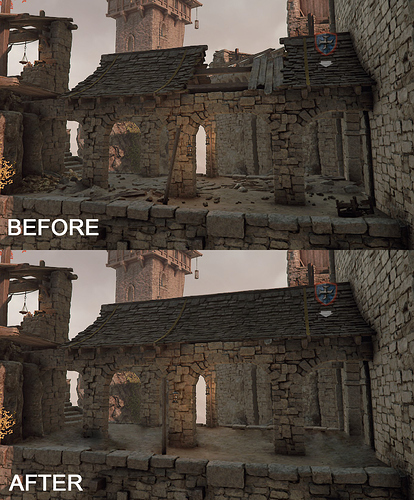 These simple things could be enhanced by more intricate and complicated additions:

Well, at least that can be fixed rather easily. There is an approved mod for that.
https://steamcommunity.com/sharedfiles/filedetails/?id=1495937978

I want my grimdark to be grim and not proper all build stuff, they dont have time in end times to do that kind of meangless work

out of all the things you could be concerned about, this is what you chose? smh, you haven’t played enough. im THAT guy i guess